Reduce the cost to play Keen as Lances by 1 for each card worth no victory points in the victory display.

Action: Add Keen as Lances to the victory display. Then, choose one: add 2 resources to a hero's resource pool, draw 3 cards, or reduce your threat by 4. 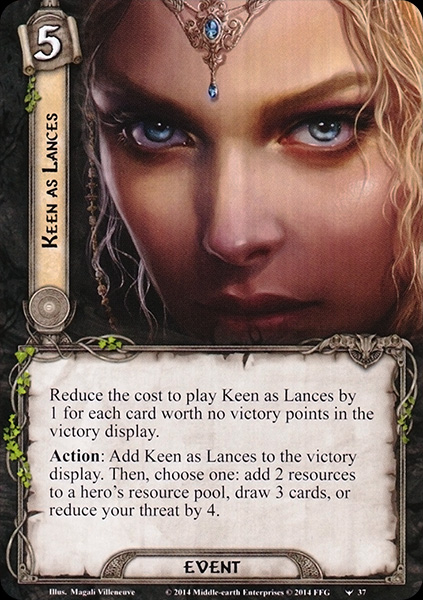 It's unfortunate the book quote that inspired this card couldn't fit on the card's flavor text, but here it is, when the fellowship meets Celeborn and Galadriel...

"Very tall they were and the Lady no less tall than the Lord; and they were grave and beautiful. They were clad wholly in white; and the hair of the Lady was of deep gold, and the hair of the Lord Celeborn was of silver long and bright; but no sign of age was upon them, unless it were in the depths of their eyes; for those were as keen as lances in the starlight, and yet profound, the wells of deep memory."

Cue Magali Villeneuve to do her thing, and wow, does she deliver. Galadriel's piercing gaze seems to look right through you. So artwork-wise, this card is great. What about the ability? It also delivers. After all, if Galadriel aids you (as when she gives gifts to the fellowship, with Gimli's interchange being my favorite) then expect a big payoff, and this card gives 3 great options. Of course, the drawback is the very high cost.

The main way to play this card efficiently is with cards that put non-point cards (at times including themselves) into the victory display, such as Out of the Wild, Scout Ahead, Leave No Trace, and None Return, which quickly make Keen as Lances much cheaper. Not only that, but playing Keen as Lances also makes later copies cheaper as it also goes into the victory display.

However, you'll note that all the other cards are , which seems to limit you to that sphere... or does it? After all, the card is neutral. That leads to the other use I've found for this card, which is if I'm playing two-handed with no , and at least 1 deck (optimally both) tend to have an abundance of resources (but are a bit shallow on card draw) then I've put 3 copies of Keen as Lances into both decks. In such decks, at some point (usually fairly early) I'll have plenty of resources to play the first copy, then the next is cheaper, and so on. It works great with wealthy decks, and even includes a threat-lessening option if necessary.

I've thought it'd be interesting in a 4 player game to have each deck contain 3 copies of Keen as Lances (assuming at least 2 decks are resource rich) to start a big domino effect, later making it Christmas for everyone else's copies. Theoretically, that'd be 15 resources for drawing 36 cards. (Unless 1 deck does one of the cards above, making it far cheaper, and dropping the total cost of them all to 6 or less). Of course, the drawback is they could clog hands until they're made playable, but as I said, that's all theoretical.