'He is dead then,', said Frodo. 'I feared it was so.'
The Fellowship of the Ring
Ryan Barger 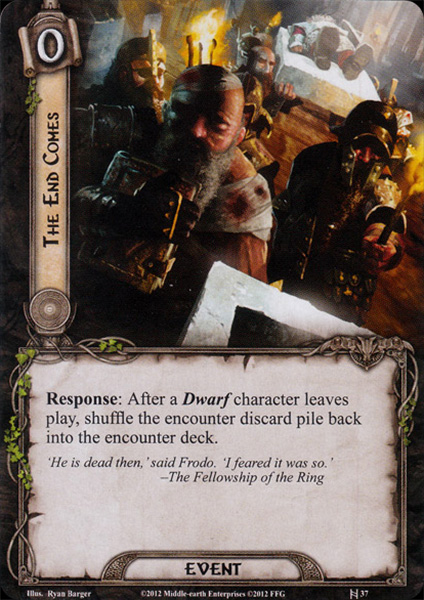 One of my favorite aspects of this game is to take cards that I feel are generally under valued by the community, and demonstrate how they have more value than you might think at first glance. That is pretty easy to do with this card, since most players find no value in it, and have probably never played or thought about playing it.

Basically, what this card does is function as a means to shuffle the encounter deck. This can actually be useful in the following situations:

Of course, the real issue with this card is the puzzling restriction that doesn't allow you to play it unless a dwarf character leaves play. This alone makes this card fairly difficult to justify outside of dwarf decks, and even within dwarf decks you tend not to see a lot of allies leave play. To my knowledge, there are no "discard for" effects on any dwarf characters. Probably the best way to get around this odd restriction is to include a Miner of the Iron Hills or Erebor Hammersmith. These are cheap dwarf allies that you can use for their "enters play" effects, and then chump block with them to use this card. Luckily, both of these dwarves are in sphere with Denethor and other scrying effects.

It may not be over powered by any stretch of the imagination, but give this card a try sometime. You might find it can be more useful in a pinch than you first thought.

MDuckworth83 2666
Did you ever try it? Upon reflection, it seems like you could put this card in a deck and design a deck around it, but the deck would be arguably worse than a very similar deck with this card replaced by something better. — ira212 223 12/22/20
2

If you thought sticking Steward of Gondor onto Folco Boffin made no sense, wait til you try to put your head around this card! Seriously this card is just plain weird. The theme makes no sense and the situation required is so restrictive....I just don't get it. At least with Steward of Gondor you get a card that is opaf out of it. But this card isnt op. Its not even af. It is just useless. There are many other ways to shuffle the encounter deck that are better and more thematic.

Mad Morderan 105
I found this card to be useful in the first quest of the hobbit box, it keeps the game going so you can get the treasures. It's just a very very situational card — SamthemanGamgee 442 5/14/18
1

This card is a real head scratcher. Why does this card exist? What were they thinking when they designed and then eventually printed this card? It is a terrible, nearly unplayable card, but at least you might think of a scenario in which it is useful, like stopping effects that bring enemies into play from discard. The effect is okay. The part that is weird is the cost and the flavor. Why is it tied to a dwarf character dieing? This makes the card so awkward to pull off that nobody even bothers to try. It's not like you can just kill your own ally at will. You can discard some rohan allies or whatever, but not a dwarf. It doesn't even fit the theme. Why would a dieing dwarf shuffle the encounter discard back in the deck? What is the flavor here? The name and flavor text seems to refer to when the fellowship discovered that Balin's colony in Moria had been destroyed. So, this knowledge gives them insight that prevents discard recursion effects? I don't get it. I personally think it would be great if there were player cards that could interact with the encounter discard, but this is a confusing bust.

DukeWellington 177
I find a way to use this card. The Gandalf-Dwarf Miners, dig deep in your deck. This card is perfect to recycle the deck. Ok, I know we have that Spirit Event, but this card is 0 cost!, and with those weaks miners, is easy to destroy one of them. — Libro Rojo 301 9/20/16
BAH, I missread, thinking that you shuffle your deck! but it is the encounter discard pile..... — Libro Rojo 301 9/20/16
All that I can say for this card is that there are times where it is advantageous to reshuffle the encounter deck. One would be when you know through scrying what is coming in the next few rounds and don't like it. Another would be if something you were looking for (Ranger of the North comes to mind, or Tom Bombadil) got discarded as a shadow. There are other scenario specific times where it could be useful as well (Deadman's Dike with 3 copies of Cursed dead in Discard!). — MDuckworth83 2666 9/21/16
Accidentally posted too early. To finish my thought, the real issue with this card is it's situational requirements. Atleast it's 0 cost neutral. I could see using it maybe 1x in the right scenarios with the right player deck. — MDuckworth83 2666 9/21/16
Best use of this card is as an indisputable proxy. That is because I’ve never used the card for its intended purposes and most assuredly never will. — Nystrum 23 8/28/21