Ready up to X Dúnedain characters you control. X is the number of enemies engaged with you.

"But when dark things come from the houseless hills, or creep from sunless woods, they fly from us."
Aragorn, The Fellowship of the Ring
Smirtouille 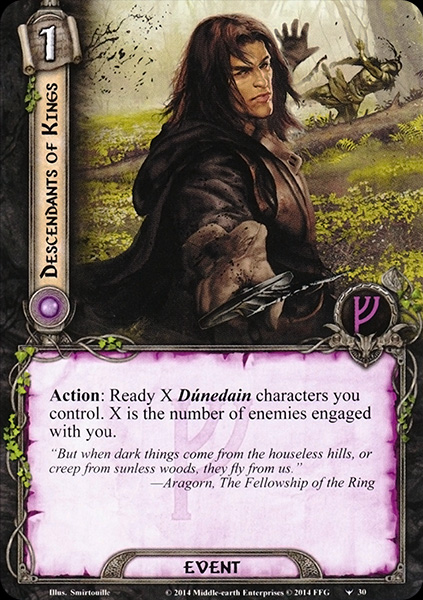 This is one of those cards which just fits perfectly into its archetype. The Dunedain deck archetype is all about keeping enemies engaged. The drawback of this is of course that barring Forest Snares you need to keep finding ways to handle the defences of all those enemies to continue reaping the benefits. You may have a solid plan for them, but then something revealing too many additional enemies (e.g. via Surge) or shadow effects triggering extra attacks can throw a spanner in the works of said plan. Or maybe you're short on ways to handle those enemies until you can get more of a board-state - but you can't easily get out that board-state until you're gaining the benefits of having the enemies engaged, a seeming catch 22 which can only be resolved by some big boost. In all of these circumstances Descendants of Kings comes up trumps.

If all you need is to defend all your attacks, then by readying Dunedain characters equal to your engaged enemies you ensure that even if everyone was exhausted before playing it, Descendants of Kings will allow you to defend everything (so long as your characters are up to the defences, of course). If you have some characters already ready or have already done some defences then you'll have ready characters left over who may be able to attack (perhaps at Ranged so you maintain your engaged enemies bonuses but help out other players) or trigger other effects (e.g. A Very Good Tale, Beravor or Tale of Tinúviel off the top of my head). It's also worth noting that this is a generic action, not limited to the Combat phase, adding to its flexibility. Oh, and we mustn't forget that it only costs a single resource. For one resource this is potentially a hugely potent effect.

Of course this card can potentially also work outside of a Dunedain deck. In or out of a Dunedain deck, it's important of course that the effect is based off the number of enemies engaged with you specifically at the time you play it, so you can choose to use it at the most opportune moments - as opposed to the Dunedain lynchpin Heir of Valandil, which requires that the enemies stick around into the Planning phase. Whether you're playing a Dunedain deck which only wants to keep a certain number of enemies for HoV and other bonuses, or you're playing a regular deck (but using a reasonable number of Dunedain characters) which just wants to kill its enemies efficiently, it's helpful that you can time this card for maximum benefit at the moment when you're engaged with the most enemies and have most or all of your eligible targets exhausted. The primary use is certainly in Dunedain decks but other decks may have a use for it from time to time, especially given how cheap it is.

Ultimately, engaging a bunch of enemies in this game can be a risky prospect, especially in a Dunedain context where you keep them around into subsequent rounds, and when that risk backfires on you, Descendants of Kings is one of the perfect ways to pull your game back out of the fire.