Resources in Na'asiyah's resource pool cannot be used to pay for allies.

Action: While Na'asiyah is attacking or defending, pay 1 resource from her resource pool to give her +2 or +2 for this attack. 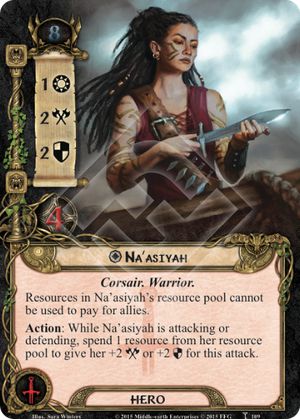 Na'asiyah is a highly interesting hero, probably even one of my favourite heroes in the whole game. Not only is her development (as presented in the Dreamchaser-cycle) one of the most creative and well-thought storylines so far. She also has some unique ingame-qualities, which make her not very easy to use, but surprisingly powerful in the right surrounding.

On the upside, Na'asiyah has very decent and well-balanced combat-stats, which come at a nicely underpriced threat-cost. With some additional equipment she can both become an excellent attacker and defender, but the greatest thing about her is her built-in ability. It means that you don't have to wait for certain key-cards or rely on some fancy combos. From the start, just by collecting resources she can become as powerful as required, even in response to dangerous shadow-effects, if necessary.

On the downside, she can't use her resources to pay for allies. Period. She works together with Dúnedain Hunter, but I recommend to either combine her with other tactics-heroes or put her in a deck that can cope without tactics-allies. Additionally, she doesn't battle-quest well, as her ability is limited to combat and only to one attack, not the whole phase. A workaround is the inclusion of Firefoot, which enables her to kill two enemies with one serious stroke (think of Crow + Troll on the Anduin or Corsair + Ship in the Sailing-quests).

A recent addition to potential strategies are the contracts from the Eastern cycle. In particular, Forth, The Three Hunters! is the perfect foundation, because it both legitimizes the no-allies approach and also helps saving resources.

Here are some of my decks with Na'asiyah:

Additionally, I just love the way how her game mechanics complement her background story. First, she is a (nasty!) enemy, then she becomes an ally and finally joins the ranks of heroes by abandoning the way of her evil master. Still, many people mistrust her, but life has made her tough, and she can definitely stand her own ground. What a warrior-lady she is!