Response: After you engage an enemy, if you control at least 1 Dúnedain hero, spend 1 resource to put Ranger of Cardolan into play from your hand, under your control. At the end of the round, if Ranger of Cardolan is still in play, shuffle it into its owner's deck.

The Wastes of Eriador #10. Neutral. 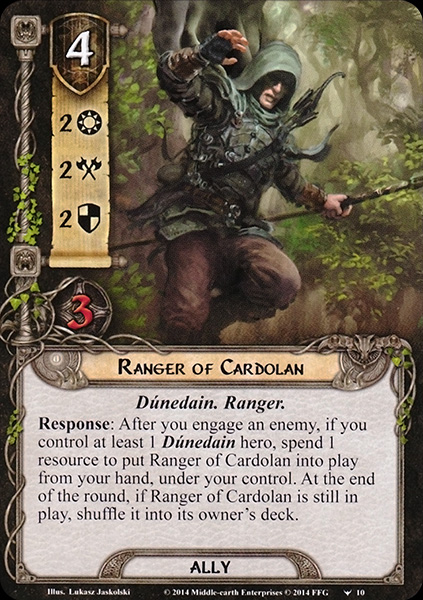 The Ranger of Cardolan is an ally that I've found I quite like, even if he doesn't make his way into every deck. His chief strength is in his versatility - with a solid statline, he can perform well in questing or in combat, and can adjust to changing board state turn by turn.

If we look at his ability, taking him with Dúnedain heroes sees some the obvious synergy - he can function like a Sneak Attack, coming in when engaging an enemy and being able to assist with combat, before being shuffled back into your deck at the end of the round. While he doesn't have any enters play shenanigans, the solid defensive statline of 2 3 means he can survive most average attacks comfortably, avoiding shadows that trigger on destroying characters, and also isn't worried by shadows that deal damage to the defending character.

The timing of him leaving play also plays into the versatility aspect - because it is at the end of the round and not phase he will ready before leaving play, enabling him to be used for effects that require exhaustion of a character, such as A Very Good Tale. or Distant Stars. He also has excellent synergy with Expert Trackers, as Responses can be triggered in the order you choose, so he can enter play and then be immediately exhausted.

Note the Response isn't tied to the combat phase, so engaging enemies through other effects like Dúnedain Hunter or Wait no Longer will allow him to stay in play for the entire round, and gives the option to quest as well. And also the resource spent to put him in play doesn't need to come from the Dúnedain hero, just that you need to control a Dúnedain hero to put him into play.

And if we ignore his response, and just look at him as a body on the table? A solidly versatile statline similar to the ally versions Haldir, Gimli, or Imrahil. Being neutral however means he is much easier to get into play, as any hero having a resource leading into a new turn will enable him to be played. Being a Dúnedain he can calso come into play much cheaper via Heir of Valandil, and is never a bad target to exhaust or ready for Tale of Tinúviel.

He is of particular value in the Bond of Friendship contract that requires neutral cards and generates 4 resources a turn - any given turn he can be played straight away, and can fill any function needed in case cards from a particular sphere haven't yet turned up, then change up once the dedicated allies come out.

I've almost never been disappointed to see him in my hand, even without running a Dúnedain hero.

Mythik 142
I like this card, a lot. Have the &quot;gandalf&quot; feeling with an abvious dunedain sinergy. and as you said with card like Heir of Valandil it is a good card, a 3 cost neutral ally with the characteristics of a hero card. Good response too imho — giova 21 1/4/23