Attach to a Hobbit character.

'And I put as fast a hitch over the stump as any one could have done, in the Shire or out of it.' Sam, The Two Towers
David A. Nash 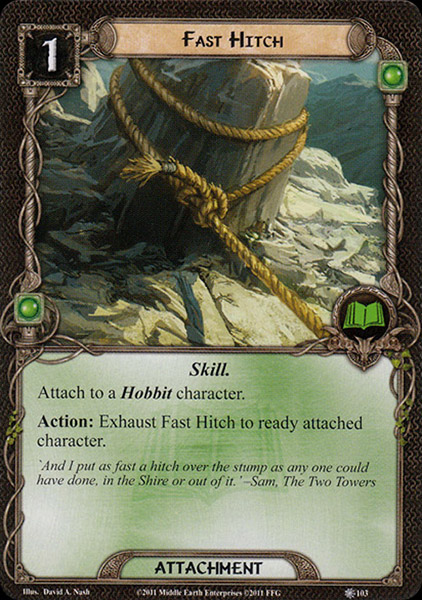 Here's a card review that was inspired by consuming some amusing podcast material, rather than a need for strategic analysis (However the previous reviews could use a little update; pretty sure Rosie Cotton with Sword-thain or Messenger of the King weren't considered in their time; Fast Hitch has aged very well as the Hobbit architype has been more fully fleshed out). I love you Card Talkers, but I got some chuckles out of this one ; and, it brought to mind that many people may play the cards at face value w/out ever considering their thematic reference or canonical origin. (Are people forgetting to shout "Ninnyhammers!" just prior to exhausting Fast Hitch? You people are missing out!)

Card Talk Live: Shadows of Mirkwood Cycle (Tune around the 26:00 mark; "How does a Fast Hitch mean that a Hobbit should get a ready out of that?" Maybe they were in a stupor, scratching their heads, unable to think, like Sam in the upcoming quote (it was a live show after all).

"We've done it! We've escaped from the Emyn Muil! And now what next, I wonder? Maybe we shall soon be sighing for good hard rock under foot again."

But Sam did not answer: he was staring back up the cliff. "Ninnyhammers!" he said. "Noodles! My beautiful rope! There it is tied to a stump, and we're at the bottom. Just as nice a little stair for that slinking Gollum as we could leave. Better put up a signpost to say which way we've gone! I thought it seemed a bit too easy."

"If you can think of any way we could have both used the rope and yet brought it down with us, then you can pass on to me ninnyhammer, or any other name your Gaffer gave you," said Frodo. "Climb up and untie it and let yourself down, if you want to!"

Sam scratched his head. "No, I can't think how, begging your pardon," he said. "But I don't like leaving it, and that's a fact." He stroked the rope's end and shook it gently. "It goes hard parting with anything I brought out of the Elf-country. Made by Galadriel herself, too, maybe. Galadriel," he murmured nodding his head mournfully. He looked up and gave one last pull to the rope as if in farewell.

To the complete surprise of both the hobbits it came loose. Sam fell over, and the long grey coils slithered silently down on top of him. Frodo laughed. "Who tied the rope?" he said. "A good thing it held as long as it did! To think that I trusted all my weight to your knot!"

Sam did not laugh. "I may not be much good at climbing, Mr. Frodo," he said in injured tones, "but I do know something about rope and about knots. It's in the family, as you might say. Why, my grand-dad, and my uncle Andy after him, him that was the Gaffer's eldest brother he had a rope-walk over by Tighfield many a year. And I put as fast a hitch over the stump as any one could have done, in the Shire or out of it."

"Then the rope must have broken - frayed on the rock-edge, I expect," said Frodo.

"I bet it didn't!" said Sam in an even more injured voice. He stooped and examined the ends. "Nor it hasn't neither. Not a strand!"

"Then I'm afraid it must have been the knot," said Frodo.

Sam shook his head and did not answer. He was passing the rope through his fingers thoughtfully. "Have it your own way, Mr. Frodo," he said at last, "but I think the rope came off itself - when I called." He coiled it up and stowed it lovingly in his pack.

"It certainly came," said Frodo, "and that's the chief thing. But now we've got to think of our next move."

The Two Towers: Chapter 1. The Taming of Smeagol

The lines "If you can think of any way we could have both used the rope and yet brought it down with us", "Climb up and untie it and let yourself down, if you want to!" and "now we've got to think of our next move." imply that because of the rope coming loose they are now available to take a second action that they wouldn't have otherwise been afforded. Now, my main niggle is that the extra readying is really the result of the magical quality of the elven rope, not the knotting knowledge of generations of Hobbits. But I think the elements are there: Sam remarks how many of the Gamgee clan were experienced with ropes, and now, by their fortune, the Hobbits are free to get on with their quest.

Nothing but affection from me; No Card Talk hosts, guests, or Teddy bears were intended harm in the writing of this review

Fast Hitch is a very good card. An Unexpected Courage for one resource is bonkers, but then Hobbits were never really worth those extra actions; unless your running a super Bilbo or Sam deck. The recent influx of Hobbit cards in the Mountain of Fire has made this even more useful. Another point is that it attaches to a character not just to heroes.

Hobbits don't have very high stats, but look at it this way... There's no hero in the game that wouldn't be worth 1 resource if they were an ally. Putting this on a hero is somewhat like paying 1 for a slightly overstatted ally, plus the extra "abuse ceiling" if you were to start using attachments and tricks with them. Also notice that it isn't restricted. There's really no downside if you happen to be using hobbits and books.

That said, the best recipients are characters with exhaust abilities or decent attack - willpower only matters once per round typically, and hobbit blockers will quickly end up as chunky salsa. That basically implies Merry, in either his or variations. Merry is the only hobbit who can have a respectable base attack, plus you'd have access to Dagger of Westernesse already. Merry could quest for 2 without giving up his ability, plus he could reduce threat multiple times if shadow effects reveal extra cards (fairly common.) Frodo Baggins is another decent target for his 2 and safe block, but only once per round. In other cases so far, it's not too exciting until you get some combos together.