While you control 2 or fewer heroes, attached hero does not exhaust to commit to the quest.

While you control 5 or fewer characters, attached hero gets +2 .

"Strider can take you by paths that are seldom tridden. Will you have him?"
Aragorn, The Fellowship of the Ring
Ken McCuen 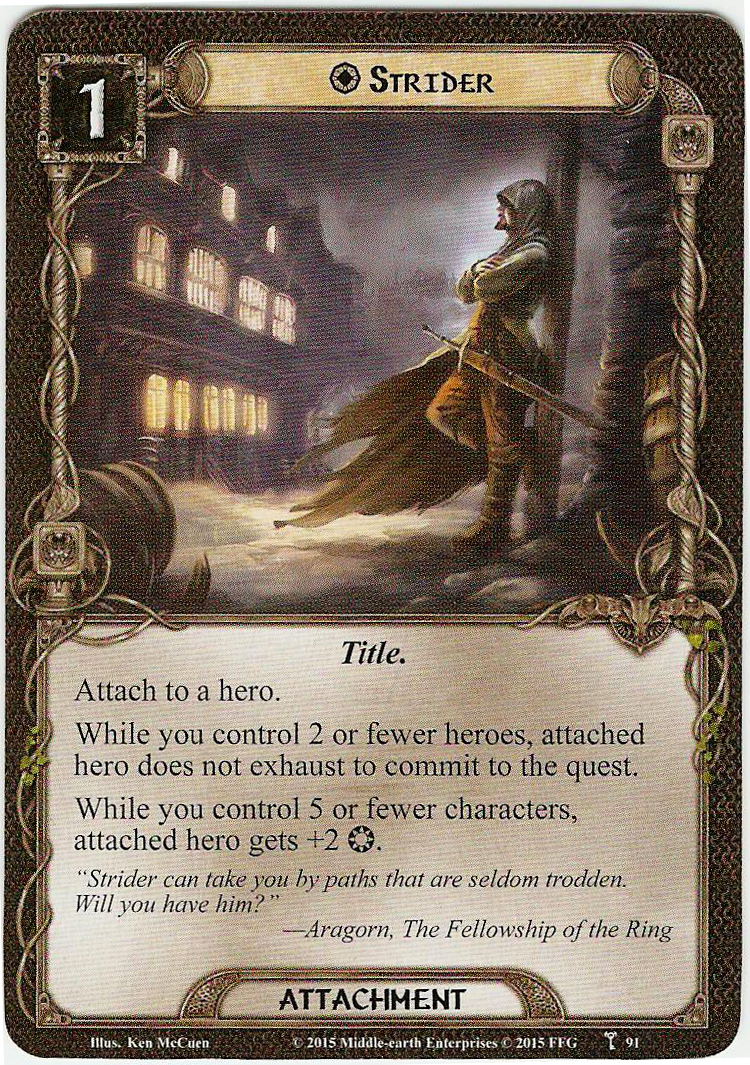 Strider is the single most powerful and versatile attachment card from this cycle. I would push "this cycle" back a lot further too and say this card is on the level of Steward of Gondor and Expert Treasure-hunter. While other reviews correctly point out how this card finally glues secrecy decks together, I really want to say that this card is not for secrecy decks only. This card is very good for almost every deck and absolutely great for any deck with decent draw power. Strider gives any deck two for 1 resource of any sphere early game and whenever you are losing ground against the quest deck.

The early game is where this card truly shines, before you can play an army of allies. If you run three copies of Strider in a 50-card deck, the probability of opening a copy turn 1 (out of 7 cards) is 37%, just over a third. If one of your heroes is Círdan the Shipwright the probability goes up to 42%; if one of your heroes is Erestor, half the time (49.5%) you will open it. Card draw like Daeron's Runes and Elven-light of course increase the probability of seeing it turn 1. How likely will you have more than 5 characters on board turn 1, or even turn 2, turn 3? Not that likely. Even if you are playing mono-sphere with a guaranteed resource accelerator like Arwen Undómiel, that's still 4 resources turn 1, maybe enough for 2 allies if you are not looking to save any for important events. Never mind you might lose allies just as quickly from the encounter deck or chump blocking. Basically Strider offers a guaranteed, relatively safe 2 for any one resource early game, and it does not require any other combo piece like O Lórien!. Previously the only card that will give you 2 for 1 resource is Silvan Refugee.

The card is also not absolutely dead as soon as you have more allies. Its effect is continuous which means it will spring into action when you need it the most. Many encounter decks hit you with direct damage and it's entirely possible to lose allies in the questing phase, and suddenly Strider pulls you back up. The other 2 for 1, Silvan Refuge, adds insult to injury when your game state deteriorates (when you lose an ally, she also goes), while Strider strengthens your position when you lose some ground. Similarly, if mid to late game you lose a hero, Strider instantly bolsters your position by giving you action advantage on another.

Also, because Strider offers a semi-permanent boost to , it means other equipment and events become much more powerful. Early game, Éowyn equipped with Golden Shield and Strider will be defending for SEVEN. Glorfindel with Light of Valinor and Strider will quest for 5 and attack for 3, or attack for a whooping EIGHT if boosted by a Fair and Perilous. And let's not forget the hero meant for this card: if Aragorn is thus equipped, he will be questing for 4 and attacking for 3 (or defending sentinel) without even needing another card.

So do not pack Strider away in your secrecy box just yet! Any time you play deep card draw like with Cirdan, Erestor, Daeron's Rune, etc. you should also strongly consider Strider. Any time you play cards that take advantage of high like Golden Shield, Fair and Perilous, Ride Them Down you should also consider Strider. This is not a niche card to bolster a specific deck, it really is a versatile, powerful, and cheap boost that saves you when you are just getting out the door or downtrodden and in great peril. It combines especially well with decks that have inherent action advantages as well as decks that have deep draw (hence better chance of opening it). And it has neutral resource requirement, neutral! Next time you build a deck just throw 3 copies in and test it out, and let me know how it works for you. :)

Otherworlder 32
They Grey Wanderer Contract basically says &quot;Setup: Search your deck for Strider and attach it to your starting hero.&quot; — Truck 1260 2/23/21
7

One of the most interesting cards released recently, I think. Two hero secrecy decks were a curiosity when secrecy was introduced. Sometimes they could work out well, other times, overcoming the starting lag in actions and stats was too difficult to be feasible. Now we have this card, which helps cover the old problems of secrecy. Granting both action advantage and two more , Strider goes a long way to helping two hero decks compensate. Now the question is, which heroes does it synergize with best? I've seen decks that play it on Treebeard, allowing him to contribute his big stats to both questing and combat. This certainly can be effective, enabling a hero to both quest and attack or defend, but what if you aren't playing a deck designed to do any combat? There are ways for this card to be used to good effect by decks focused on questing or support. Heroes like Beravor, Eleanor, Dori, Haldir of Lórien, spirit Merry, and Argalad all have an action they can exhaust themselves for. Strider enables them to quest and exhaust for their useful actions after questing! So you can send Beravor to the quest and exhaust her for card draw or even Distant Stars or Quick Ears. You can send Eleanor to the quest and always have her ready to cancel a treachery, and the other four mentioned heroes can all use their actions to help when enemies show up after questing. What about using it to make Elrond or Círdan the Shipwright quest hard and still have 'em ready to use their rings, Fair and Perilous, or Tale of Tinúviel? This is just one way it can be used to help the team in multiplayer games. The simple fact that Strider provides another action means it will work well with heroes that can be exhausted to use another action, whether they provide it from their own text box or from an event or attachment. It is an enabler of many new possibilities.