Response: After another hero is declared as a defender, exhaust Dori to add his to the defending hero's for this attack.

Dori was really a decent fellow in spite of his grumbling.
The Hobbit
Sebastian Giacobino 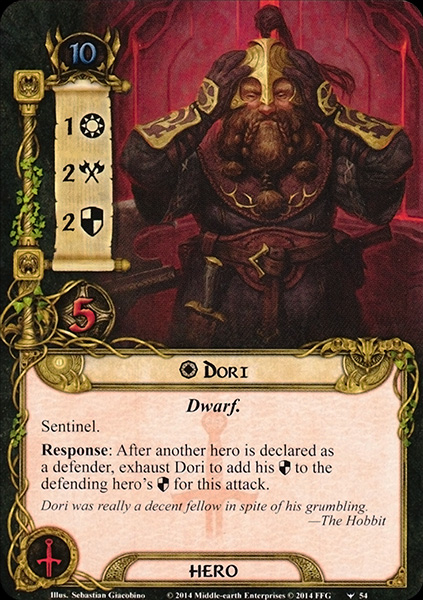 Hero Dori is a bit of a difficult card to evaluate for me. He is one of the more lacklustre heroes in the game and like many people I was disappointed by the number of limitations on his ability. It's a pretty situational ability and a difficult one to make good use of. However, despite the problems he is still substantially better than most people think and so I feel I have to both criticise and defend.

Statistically, he's flexible. 2 /5 Sentinel makes him a decent defender but 2 can also be useful on the other side of combat. He's a Dwarf and so works with all the many Dwarf cards, like King Under the Mountain, Dain Ironfoot, Lure of Moria and so on. Now one might hope for better than 2 in a defender but I should point out that the Dwarf trait in general doesn't actually have a lot of . Other than Dain's 3, no Dwarf hero has more than 2 , but the trait does pretty well for hit points so this is consistent at least.

The main thing to consider though is the ability. Adding to someone else is an interesting defensive ability, but the problem as I said is the limitations on it. The timing is specific to when the other hero is declared as a defender, where you might prefer to have the flexibility of being able to trigger the boost after seeing the shadow card; and it only works to increase the of other heroes, not allies. If either of those aspects was changed then Dori would be a lot more palatable - allowing you to wait until you see the shadow card before making your decision would ensure Dori's action wouldn't go to waste, while allowing him to boost allies would mean you could effectively treat Dori as your defender and your defensive allies as attachments improving his and being discarded if any damage gets through to keep him healthy. Both possibilities seem potentially interesting, but sadly neither is quite possible. Instead, using Dori's ability means you're devoting two hero actions to just defending one enemy and Dori's ability has to be triggered pre-emptively, potentially going to waste if you used it to guard against a shadow effect which doesn't happen.

That's the big criticism of Dori. So conversely, what are his potential good points? Well, the announcement article for Across the Ettenmoors said the new Tactics hero "lends versatility to your fellowship's defensive efforts," and Dori can do that. Defensive difficulties tend to arise in one of two forms - either you have many enemies to defend and need a surplus of actions for all of them, or you have one big enemy and need a single more powerful defence to keep your board state alive. This I think is the kind of versatility the article meant, in that in the first instance Dori can simply defend one of the many enemies himself whereas in the latter case he can provide a boost to keep your main defender safe from the larger and more dangerous enemy. Clearly this is potentially a costly approach in hero actions, so it's really much more of a multiplayer strategy, as with more players and consequently more heroes on the board it's a lot easier to justify expending a hero action on something which could easily be covered instead by an attachment. With the attachment comparison being said though, aside from the versatility angle there's also always something to be said for having an ability available on one of your heroes, so it's guaranteed to be in play right from the start of the game, regardless of the luck of your draw.

The flexibility of being able to provide that extra anywhere on the table is certainly an interesting one, but if you particularly want to build around Dori, there are also ways of doing that. One obvious point would be if you have a hero with access to some sort of good defensive ability but not enough actual innate to stand up to the toughest enemies - a classic example of this would be a lower hero with A Burning Brand, Bilbo Baggins being a classic example people have played around with. The Burning Brand means you know for sure if Dori's boost is needed or not and you can maintain an otherwise more fragile defender without taking a bunch of unnecessary damage. On a similar principle, Erkenbrand has innate shadow cancellation at the cost of damage, and his 3 isn't always enough against stronger enemies, so having the option of adding an extra 2 to that and maintaining his hit points (aside from the cost of using his ability) can make for a very safe defensive solution. Sticking to dealing with shadow effects, a hero with a Staff of Lebethron might sometimes like a boost (perhaps Dori could boost a defending Hobbit when your threat gets too high for the Hobbit Cloak to work?), sometimes discarding shadow cards with effects like Gandalf's Staff, Jubayr or Armored Destrier can lead to very predictable defences which are all the same problematic because you'd rather save your stronger defenders for the enemies which do still have shadow cards. Perhaps in such a circumstance all Dori is doing is saving you some healing later, but that's not nothing. Aside from the improvement of less obvious defenders, Dori can also work with more usual dedicated defenders, and the ability to boost another hero's to high levels synergises nicely with any effects which depend on the defender taking no damage - as such Dori can potentially work nicely with The Day's Rising, Desperate Defense and Beregond to ensure you always get those benefits.

The biggest cost of Dori's ability is as mentioned that you're expending two hero action on defending a single enemy. In a lot of cases you don't need to bother trying to get extra actions out of Dori though, because as noted the really big high enemies more commonly appear one at a time so you only need him once each round and for the lesser enemies your normal defenders are OK by themselves. That said, an effective idea I have seen brought up is to pair Dori with Gimli, so they can defend together for 4, Gimli can pay a resource to ready Dori and ready himself through some other means (Armoured Destrier would be the obvious choice) and they can defend again. Not a particularly difficult setup to achieve and a pretty effective defensive solution. Hold Your Ground! in a Valour deck would also be a decent way to get an extra use out of Dori when you have a lot of defences to make.

Ultimately, it's a shame that Dori has as many limitations as he does, and arguments can certainly be made that there are better choices (e.g. instead of having Dori to boost you could have Beregond just defend instead), but he does have some particular niches he can fill, including but not limited to simply being a supplement to those more popular defenders, and he doesn't deserve to be dismissed as much as he has been. You may be somewhat justified in criticising him, but Dori is really a decent fellow in spite of your grumbling.

Warden of Arnor 5139
Dori and Leadership Gimli do a great job together. Gimli can use his response on Dori after Dori uses his. And with an Armored Destrier in Gimli both standing — JanB 32 12/28/17