Response: Exhaust A Burning Brand to cancel a shadow effect just triggered during an attack that attached character is defending. 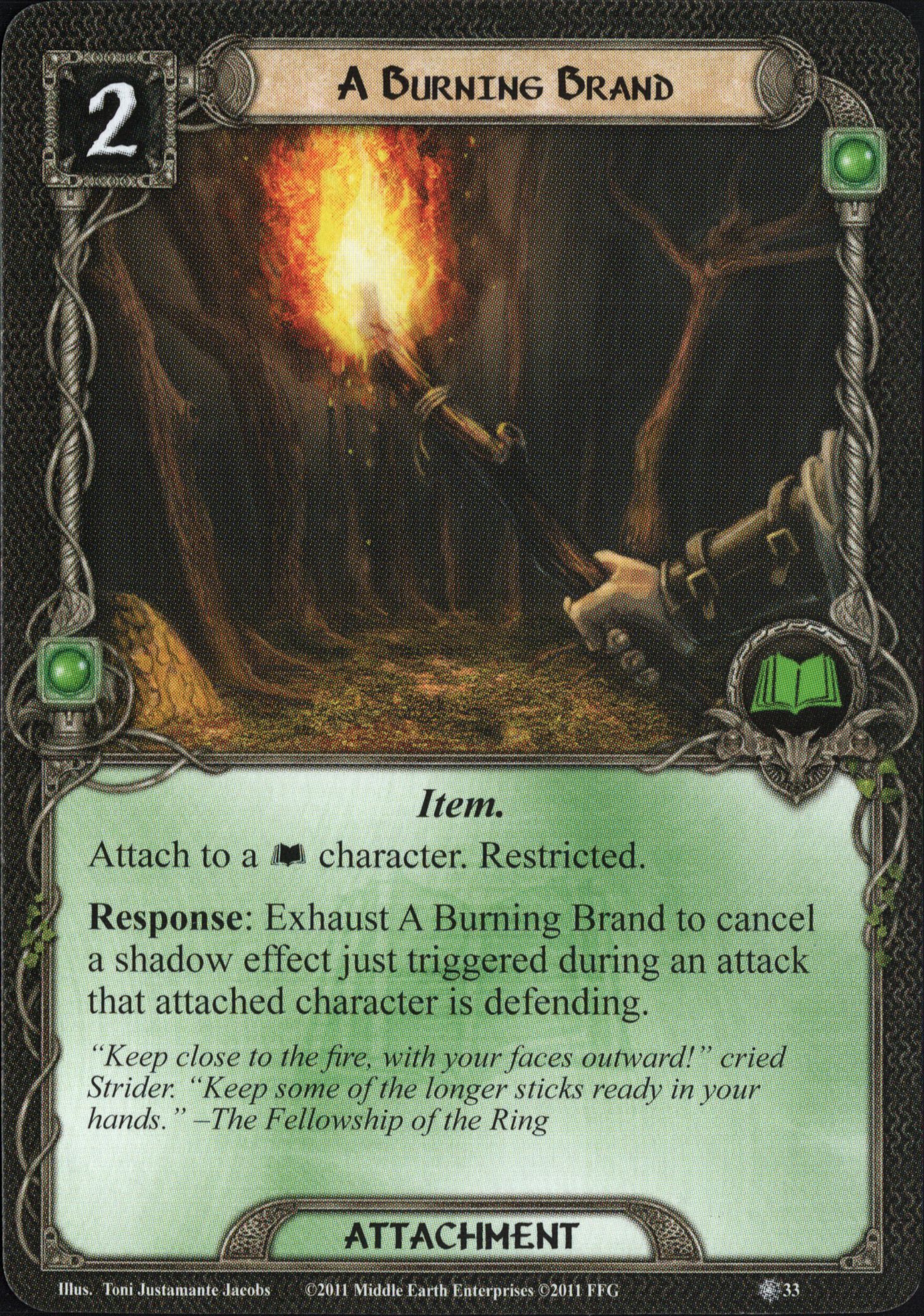 Benettnash 17
My card doesn't have those words so nope still good ;) — Christian_Medic 828 9/14/19
After hearing about this errata, i was thinking that this would work well with the upcoming Three Hunters contract: the restricted is a good thing for once? Either way, exhausting is a nerf that i can't spin into a good thing though. — bento 14 10/22/19
What gives with this card not getting an errata in the FAQ but it's printed differently now? What other cards are like that? — slothgodfather 45 12/13/19
This change is certainly controversial, but I think for the best. The original version was OP. Not only did it make Dark Knowledge obsolete as the reviewer below says -- it pretty much made shadow effects obsolete so long as you had access to readying effects. The new version is still very playable. Being able to repeatedly cancel the worst shadow effect each round is still a powerful ability and well worth a restricted slot. What I'm more annoyed about is that people started spotting these changes a year ago now (see &quot;Different cards with the new reprint?&quot; in FFG forums dated April 2019), and there is STILL no updated FAQ from FFG?? — 3ric 117 4/5/20
I've been trying 2-player Ruins of Belegost with post-errata Burning Brand, and that quest got way harder. — Tegyrius 113 4/5/20
When an enemy gets multiple shadows, are they all revealed at the same time, or should you reveal one at a time and choose which one to cancel before checking them all? — Freeman 3 4/22/22
3

Wandalf the Gizzard 1871
The card says &quot;character&quot;, not &quot;hero&quot;. There aren't many tough lore allies in the game that would benefit, though. — Edheliad 21 12/22/17
IMO, it's pretty much down to #Gildor (3 def), #Haldir (2 def, sentinel) and possibly a couple of Ents (since its not a restricted attachment) as viable targets. But I've had several games its really paid off. Of course there are other ways to get a lore symbol on heroes too, since it doesn't explicitly designate a character with the 'printed' lore icon (Narvi's Belt, Song of Wisdom, hero Gandalf's ability, etc) — Quetzal513 71 8/13/19