Support of the Eagles

Action: Exhaust Support of the Eagles to choose an Eagle ally. Until the end of the phase, attached hero adds that ally's or (choose 1) to its own.

"I would bear you, whither you will, even were you made of stone." Gwaihir, The Return of the King
Ilich Henriquez 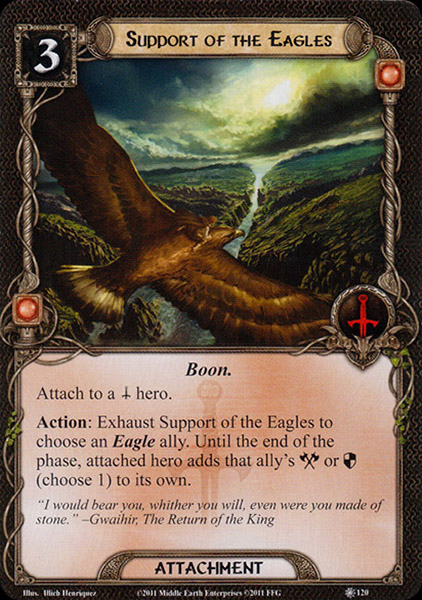 This card is fantastic and a must-have for Eagle decks. It's effect can be used at any time, stacked up multiple copies on the same hero and used for attack or defense depending on the need. With a single Winged Guardian and even two copies of this card you can be defending at +8, likewise with the 1 cost Vassal you can be up to +6 attack. The best ally is Eagles of the Misty Mountains but is a pricey combo.

On a multiple readying action hero like Boromir or Elladan it works best. But also great on Legolas with any combination of Rohan Warhorse, Great Yew Bow, Hands upon the Bow and/or Quick Strike to destroy enemies with arrow attacks from the air. Lastly combos great with Hour of Wrath to turn any hero into Boromir.

Support of the Eagles is a powerful, neat card. At face value, it's a big boost to one of your heroes for pretty much the whole game. Dig a little deeper and you realize that with readying effects, it's bordering on OP. You've found a way to make Boromir a superhero without breaking the game. It's also a good way to keep hold of your Winged Guardians or Vassals if the Windlord without losing them. Along with a pumped up EotMM, I wouldn't want to be an enemy.