Response: After an enemy is added to the staging area, deal 1 damage to that enemy. Players ignore that enemy while making engagement checks this round. 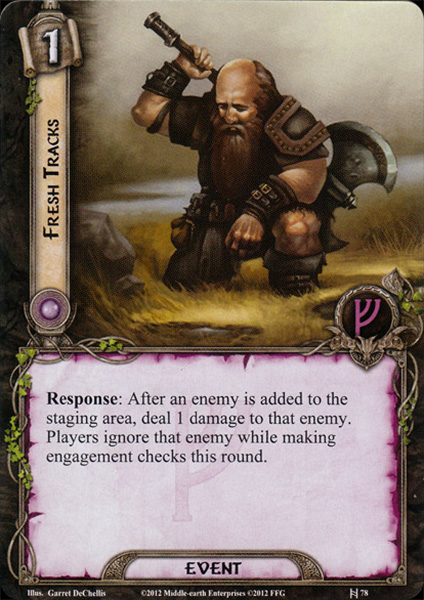 Fresh Tracks, much like Hail of Stones, is surprisingly not a bad card. You may be looking at me funny, but the ability to keep an enemy in the staging area that one extra round can make a big difference. But don't expect the damage to kill the enemy as much as possibly help next round when the enemy does come down. Who knows? Maybe you could fit it into staging area attack deck.

Wandalf the Gizzard 1991
Since it's a response, does this allow you to dispatch some Mirkwood type bats that have 1 HP and surge (like a questing Thalin) and prevent the surge effect? — Quetzal513 77 3/5/18
Ah, I think I answered by own question; the timing would make the difference. Thalin says to apply the damage &quot;as it is revealed by the encounter deck&quot; where Fresh Tracks states &quot;AFTER an enemy is added to the staging area&quot; — Quetzal513 77 3/6/18
Correct. Effects work in this order: passive, forced (when revealed, surge, doomed), response, action (only in an action window). — Wandalf the Gizzard 1991 4/13/18