Response: When this stage is defeated, each player may choose and discard a non-unique enemy engaged with him. 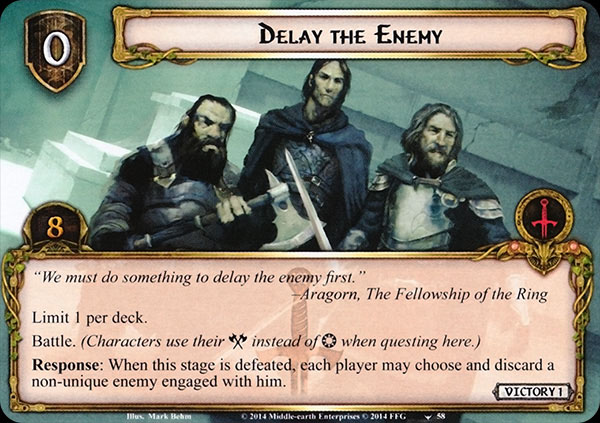 Side quests have a lot of variance in utility, ranging from always useful like Gather Information, to Explore Secret Ways which requires a bit of shenanigans. However, Delay the Enemy falls into its own category of almost useless. This sounds a bit harsh, and there are maybe one or two niche cases where it has a use. But let's take a good look at its obviouse purpose: to get rid of an enemy. First of all, it has the battle keyword, meaning that questing characters use their attack rather than their willpower. So the first knock against the card is that we're using the stats that would kill the enemy outright to kill it through a side quest. That's . . . different, I suppose, but certainly not economic. The card has eight quest points, so if you have enough attack to beat this quest, you'll have more than enough to take out whatever enemy your dealing with. Another disadvantage is that the enemy must be engaged with you. Thus you couldnt use it to take down a nasty hill troll that's been hanging out in the staging area. Of course there are ways to get around this, such as discarding a Westfold Outrider, but it would make entirely more sense to just do that and kill the enemy the normal way. In short, the main problem with this card is the battle keyword and the Tactics sphere. If this card didnt have that keyword and was in Spirit it would be amazing, coming from a sphere high in willpower and low in attack.

Before we write this card off, I would like to highlight one possible use for it, though I must admit it is rather niche at best. If you are running a low willpower Tactics deck and begin to get location locked because of that, this card can theoretically get you out of it. You'll have lots of attack, and this card allows you to quest with the battle keyword. If you count correctly, you could quest for two or three turns and explore a location every time, allowing you to clear the staging area. And when you finally decide to finish the quest off, it kills an enemy thats been nagging you because you were using all your attack power to quest. Now this scenario would be extremely niche, and would also require no more locations to be revealed during the turns that your trying to pull this off, which is unlikely. Another more subtle problem is that the card is restricted to one per deck, so your chances of drawing it in the first place are pretty low. Finally, if your getting location locked through lack of willpower, than its almost certainly going to happen again a few turns down the road.

In a nutshell, the obviouse purpose of this card was aborted by the battle keyword, but if you try hard enough and are really desperate you can still find a use for it as a location exploration enabler.

Swordthatwasbroke 495
While I agree that this is possibly the worst of all the player side quests I guess there a few fringe cases where Delay the Enemy might find a purpose: against enemies with negative effects for attacking them (Grasping and Trashing Tentacles from Watcher in the Water), some enemies which cannot be damaged or be damaged more than X each round (the various Mumak, Black Bats, some treacheries and shadow effects, The Armies of Mordor, A Haunt for Beasts, Faithless Conspirator, Candle Bearer, Savage Hillman — Alonewolf87 1334 4/17/20