Resource Action: Exhaust a Noble hero you control to add 2 resources to that hero's resource pool.

...in these days men are slow to believe that a captain can be wise and learned in the scrolls of lore and song, as he is, and yet man of hardihood and swift judgement in the field.
Beregond, The Return of the King
Titus Lunter

The Thing in the Depths #32. Leadership. 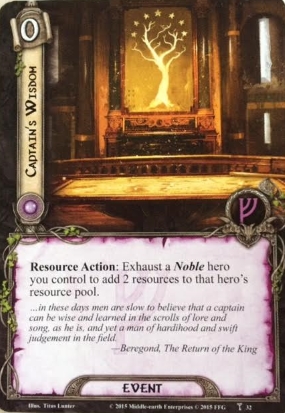 Another resource generation card from the Leadership sphere, how does this one stack up against the competition and where does it fit in the game?

So firstly you need a Noble here. There are currently 44 Noble Heroes in the game (with two as of yet unreleased ones from the Vengeance of Mordor cycle that could also have the trait), This includes 3 Saga Aragorn characters. Giving up an action was a big deal at the start of the game's life but with the slew of readying effects it's become less of one, also trading your heroes action for two more resources to be able to play a key ally, event or attachment is always a good option. There are also many heroes that specifically work well with this card including:

Tactics Boromir can trade 1 Threat for two resources (which when you compare Legacy of Numenor is 4 Threat for 3 resources and Grima is 1 for 1, it's a pretty good deal) Kahliel to help pay for his costly friends of any sphere (and he can ready himself by discarding and extra Harad ally that you didn't pay for). Bard Son of Brand to accelerate your attachment game, likewise Elrond for allies. Leadership Boromir so he can get his boost. Exhaust Eleanor if you don't end up using her ability that round. Gimli leadership if he gets readied by spirit Legolas but no enemies are drawn that questing phase. Tactics Prince Imrahil so he can summon an ally in the combat phase. Elrohir and Elladan to charge them up for future rounds of battle. And any Noldor/Silvin Noble with Light of Valinor who already has an extra action available.

The slew of different heroes and builds that benefit from this are many, and I would rank this card higher than any other Leadership resource event due to its simplicity, power and variety of decks it fits into and highly recommend this to fit into your decks that feature nobles and have access to the Leadership sphere.

Christian_Medic 616
This is a resource action, so you cannot wait and see if Eleanor isn't exhausted after the staging step, then play Captain's Wisdom. Same happens with Gimli and the timing you describe, although Tactics Boromir is fair game. — Freeman 3 12/19/19
You are correct I have only use used it with Boromir and Denethor but missed that, thank you for the clarification. — Christian_Medic 616 12/20/19