Livery of the Tower

Attach to a Gondor hero. Restricted.

This was the livery of the heirs of Elendil, and none wore it now in all Gondor, save the Guards of the Citadel...
The Return of the King
Suzanne Helmigh 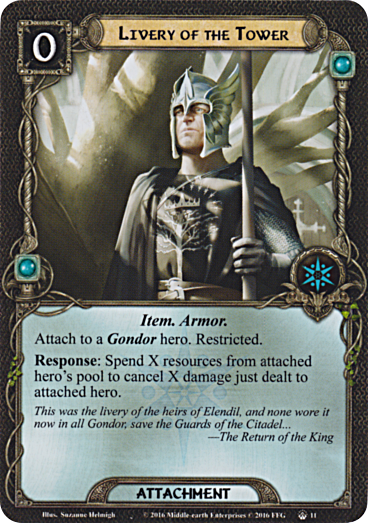 I always try to make it a point to review cards that I initially think are pretty lame, and turn out to be a diamond in the rough after playing with them extensively, and Livery of the Tower is most certainly one of these.

The instant you see this card, the initial reaction should be to compare it to Blood of Númenor; it's same cost, same sphere equivalent. At first glance it appears much weaker, as it is unfortunately restricted, "more" restrictive on the type of heroes it can be played on, it's effects are only relevant for a single attack vs. the entire combat phase, and it makes any boost >1 more expensive. Indeed on most defensive characters, it probably isn't as good as Blood and I initially included 1x in my Beregond deck as a "2nd rate blood" option just to have 4x boosting options.

However, what I learned is that on Beregond (whom it's obviously designed to play on), there is a case to be made that it's actually a really good card that can outperform Blood in the right circumstances. To illustrate this, I need to do a little bit of math.

So Beregond already starts out at a hearty 4 , and let's be realistic, if you are playing Spirit Beregond you are probably auto-including 3x Arwen Undómiel for both compensatory and extra boost for a strong defensive sentinel character in sphere. That means in most games Beregond should be defending at 5. What this means is that for any single up to 6 (5 without Arwen), Livery is effectively mostly equivalent to Blood in boosting. However, it has an ADDED benefit of also being able to cancel any form of direct damage, whether it be from enemy ability or shadow effect. This also guarantees that you will trigger Beregond's reduction from this defense (since the way I read his ability, a shadow effect that does direct damage counts as "damage during an attack" and thus negates his ability). Blood does not stop direct damage. As enemy increases to 7+ (6+ without Arwen), the defensive boost on Livery gets marginally more expensive.

So which is better? Well that depends on the Circumstances. I'll look at each dynamic that impacts the decision numerically:

In summary, Blood is a much easier played and generally powerful card overall, but Livery outshines Blood in certain builds, quests, and circumstances. Whichever one you deem to be a better option for your situation, the other can function as a less ideal substitute as well.