Attached hero gets +1 for each side quest in the victory display. (Limit +3 .)

The Dungeons of Cirith Gurat #117. Lore. 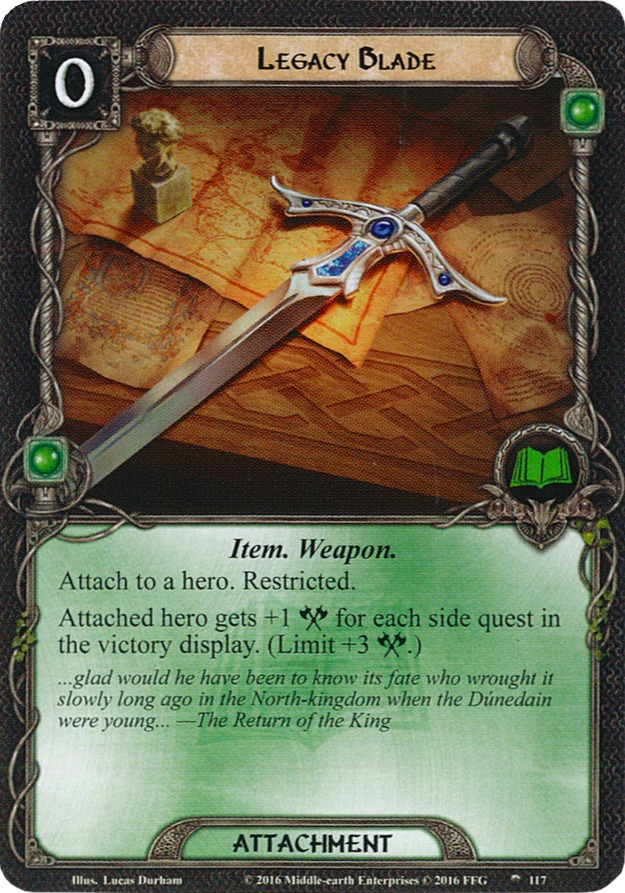 I daresay this is the most unique weapon in the game. For one, it's only the 3rd Lore weapon. (The other two are Ranger Bow and Ranger Spear, both limited to Rangers.) However, Legacy Blade has 2 limitations they don't: It can only go on heroes and it's Restricted. Oh wait, there's a 3rd -- on it's own, it gives +0 .

You "fix" that by completing side quests, but they take time. Thurindir can kick start it, and/or you bring it on quests with many encounter side quests. (It doesn't say "player side quests.") Even so, let's say you complete a side quest quickly, making it +1 ... not an improvement over other weapons. Complete another, and you're at +2 ... better, but many weapons give +2 . Now complete another and you're at +3 ... and that is, in all honestly, the goal here, is it not?

Few weapons generate that much attack. (There's Elven Spear and Haradrim Spear, but at a high cost; the one "steady" weapon than can compare is Herugrim, but with it's own limitations.) If you make that happen, you can arm a hero with 2 of them for a whooping +6 . However, by then it's probably late in the game and you could have had 2 other weapons for 1 resource each doing +4 . (Yes, it costs 0, but the real cost is in taking up deck space until you make it pay off.)

So is Legacy Blade worth it? Not usually, unless you build for it and/or bring it to quests with encounter side quests. But that's kind of the point, in that it's almost a mini-game within the game to try and max it out. Because if you're going for consistency across multiple decks and/or quests, this isn't the first weapon you reach for.

Still, I really like it for 2 reasons. First, it's thematic and distinct, in that it grows in power as you build your legacy... hence the name. And second, I think it's the coolest weapon art in the game. Not only because of the contoured handle with gemstones and smooth shimmering blade, but because it's resting on a table with maps and a mini bust, implying the heroes are pre-planning other elements (side quests) to aid in the main quest. Such an understated image conveys the card's text so elegantly, going far beyond the weapon itself.

JYoder 317
I love this card in any of my thurindir decks because even if it only adds one attack, it has done its work for 0 cost. There are weapons that give one attack for 1 resource, this one costs zero and is pretty easy to get to, any more sidequests and it just gets better — SamthemanGamgee 462 7/5/18
I hate that they gave this card a limit. I don't think it would be broken, and cards like Gimli and Gondorian Fire have no limit. Why the hate for side quests? — NERD 608 11/30/22
But how many times do you really need to stack more than +6 attack (assuming dual-wielding) on a single hero, especially late game? If you've cleared more than 3 side quests, you've probably already won anyway. While I agree the limit is silly, I also think it doesn't have a huge impact for 99% of games. — kjeld 462 11/30/22
That's kinda my point. It won't have an impact, so why is it there? It removes the creative challenge of trying to get a ton of side quests in the victory display. — NERD 608 11/30/22