Valour of the North

Response: After a character is declared as an attacker or defender against an enemy with an attachment, that character gets +3 and +3 until the end of this attack.

"Dwarf-mail may be good, but they will soon be hard put to it." Bard the Bowman, The Hobbit
Ivan Dixon

The Wilds of Rhovanion #14. Tactics. 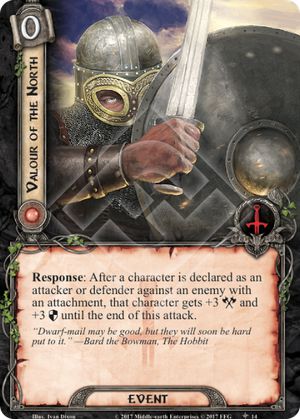 This card was largely panned by a lot of reviewers when it came out because it is situational, and unfortunately a lot of players fall into trap of being biased towards thinking only "easy" cards that play well in every situation are good. I personally think it comes from a competitive LCG/CCG mentality but I'll leave that alone for now.

Conditions aside, the effect is fantastic. A +3 stat boost for 0 cost is almost always a really good deal, but the beauty of this card is you get it in attack or defense. While attack boosts are a bit more common, defense boosts tend to be a bit harder to come by. +3 is a good relevant number also because it's just enough to take a non-defensively focused hero (and maybe even ally) to a point where he can answer an attack from most boss enemies and likely survive. What is even better is the flexibility though, you get either/or depending on the needs of the situation, and flexibility is often a quality that's hard to judge at face value and not always terribly apparent when looking at a card in a vacuum. The one draw back is that it only lasts for one attack, but since most characters in the game are not going to have a source of action advantage most of the time, that's all it really needs to do in the majority of cases.

The conditions to play this card are definitely limiting, but that just means that barring certain scenarios, it's a card that is designed to be good in a very specific deck... namely the trap deck. It combos great with Damrod and traps like Ithilien Pit and Entangling Nets because these cards effectively turn into 0 cost markers, that make an enemy eligible to card effects like this one on top of their printed card effects of the trap itself. However, the use of this card isn't only confined to trap decks. There are two other situations where it plays well.

All in all, this card is worth a second look as atleast a solid sideboard item, and you might be surprised how great it works out in a deck built with traps or guarded player cards. It can really be a life saver in the right situation. I hope we continue to see more cards like this, situational but very powerful in their niche situations, as they are what makes the game as well as deckbuilding fun and diverse.

MDuckworth83 1859
I hope you don't mind too mch, since this isn't reallly the right place... Where do you take the ruling that guarded cards on enemies count as attachments? Couldn't find anything (not that i'm doubting you or anything...) — Archol 87 10/13/18
Nope....that's a great question. I don't recall where that ruling came from. I'll do some research when I get a chance. — MDuckworth83 1859 10/13/18
Nothing says &quot;valour&quot; like stabbing a guy in a net. — NoSoup4you 542 10/26/18
I feel like this card's wording got mixed up during development - I think the original idea was to buff a character with an attachment instead (considering it's from the Dale box, the art on the card, and the flavour text). — MrIncredible 82 11/8/18
How does the timing of this work with Grimbeorn? Can he take advantage of the +3 attack for his counterattack? — casanunda 1 12/30/18