Attach to a or Warrior character. Limit 1 per character. Attached character gets +1 for each enemy engaged with you. (Limit +3 .)

The Ghost of Framsburg #89. Tactics. 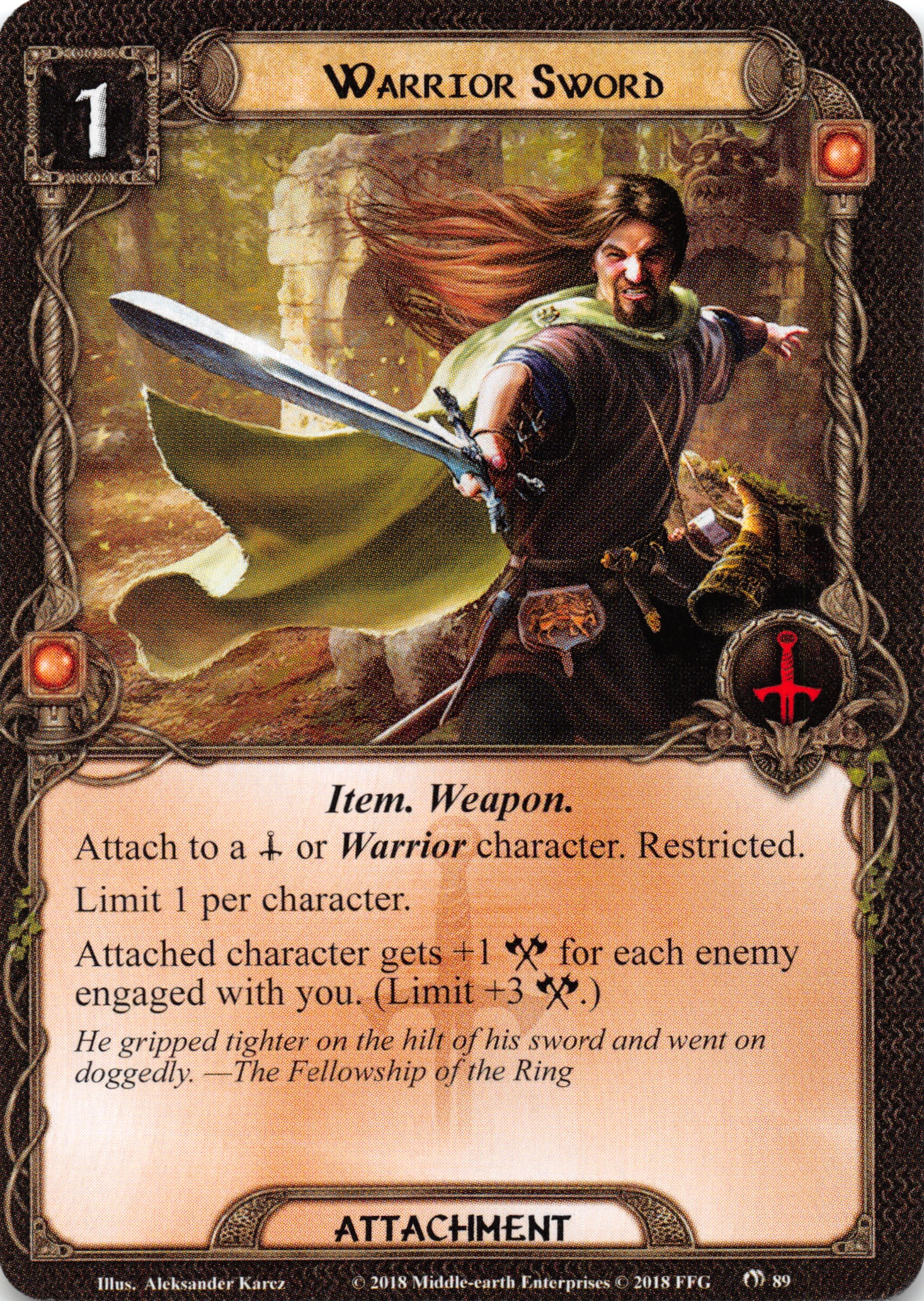 It's been awhile since we got a weapon attachment for tactics. Let's take a minute to compare this one to the current options. Firstly it's nice and cheap at 1, with only the Elven Spear being lower cost.

Dagger of Westernesse is the closest comparison as they both increase a character's attack by 1 for 1 resource cost. Dagger is better if you are running hobbits, low threat or characters that are using ranged or attacking enemies in the staging area as the sword needs enemies to be engaged with you.

Blade of Gondolin is also worth considering as despite the situational attack bonus (a lot of enemies are orc) it also has an incredibly useful ability to help quest while slaying your enemies.

The Elf, Dwarf and Rohan specific weapons are obviously better on their matching species characters and are quite useful.

And comparing the latest three guarded weapons is also a hard one as those weapons are much better but require having to overcome more locations/enemies to acquire them.

The Warrior sword has to be placed appropriately on a Warrior character, but thankfully there are 80+ such options in the game at the moment and this can include allies. The effect is straight forward, +1 attack for each enemy engaged with you up to max of +3. It pairs well with tactics Aragorn and Halbarad who will allow you to engage more enemies. Trap decks also work well to help get and keep the attack bonus at its max. Dale decks are a great way to reuse the cheap weapon to help boost your attacking allies. And characters that can ready also benefit to be able to use the bonus for the whole round. Thematically and appropriately to be art is putting it on Tactics Boromir in addition to his Gondorian Shield and try to engage as many enemies as possible. For the low cost of 2 tactics resources for that combination you could be defending at 4 and hitting at 4-6 which can make short work of most average to low HP enemies.

In closing the Warrior Sword can go on a lot of characters, is a great low cost option for the tactics decks that want to engage lots of enemies and preferably can hit back multiple times in a round. It has a lot of stiff competition and doesn't obsolete any other weapon which is a testament to good design. And if you are Rohan, Dwarf, Hobbit, or Elf there are better options. But all in all it's a great cheap weapon that has a nice fit in the current card pool. And some incredible Boromir art. 7/10