Planning Action: Return each Silvan ally you control to your hand. Then, play each of those allies from your hand one at a time at no cost.

Celeborn came forth and led the host of Lórien...
-The Return of the King
Leanna Crossan 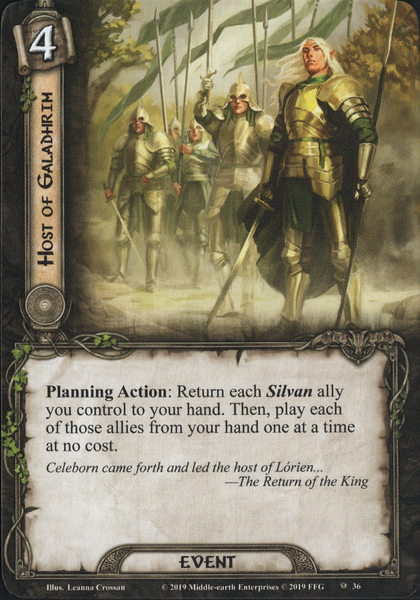 Host of Galadhrim is a great mid- to late-game card in a Silvan deck. After building up your army of Silvan allies, they tend to go stale after their first turn in play. Dropping Host of Galadhrim recycles all of those great Response abilities that trigger when each Silvan enters play. And when combined with Galadriel and Celeborn, all of those recycled Silvans are questing for +1 without having to exhaust to quest. When played toward the end of the game, this card will get you over the hump by potentially allowing you to quest for 20+ , surviving multiple enemy attacks, or finishing off a tough boss enemy.

The knock against Host of Galadhrim comes from drawing it in your starting hand or in early rounds, when you may only have one or two Silvan allies in play. Early in a game, it can be a dead card, and likely not worth the 4 resources to play. The threshold to make the card worthwhile to play is probably when you have 3-4 Silvan allies in play or when playing it will get you through the current quest card. I have found x2 copies is the right number to have in a 50 card deck.