Action: Discard the top card of your deck. If the discarded card's printed cost is equal to or higher than the number of characters you control, draw 2 cards and deal 2 damage to any enemy. 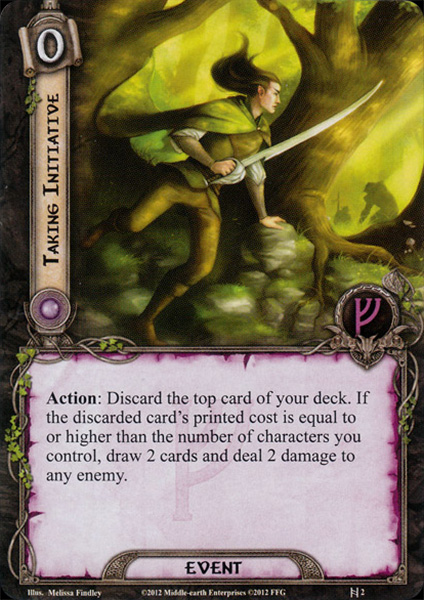 Nobody uses it, and for good reason; its activation trigger and its ability are at cross odds with each other. The low cost, extra cards, and requirement that you have few-to-no allies in play screams that this is designed for the opening hand to speed up a deck. (Heck, just look at the card's name!) But in a standard 3-hero deck, at least 50% of the cards will need to cost 3+ resources just to make Taking Initiative self-replacing, and you'll probably want at least 2/3s costing 3+ just to feel like it's turning a reliable profit. Which means unless you're playing mono-leadership, a strong majority of the cards in your deck will be completely unplayable on turn 1. In short, this is a speedy card that only plays in glacial decks, and is generally useless starting on turn 2.

There are a couple of ways to "trick" this card into usability. Two-hero decks lower the cost requirement. Secrecy cards have a much higher printed cost than functional cost, meaning you can get the benefit of triggering Taking Initiative without completely forsaking early-game playability. Those two factors, (two hero decks and secrecy), go together like peanut butter and jelly, so with a lot of massaging you can make this work. You're still going to need a lot of other card draw to make sure you're getting your Taking Initiatives in hand before you start playing allies, and of course most card draw is cheap enough that Taking Initiative will fizzle if that's what it flips. So it's a tough tightrope to walk.

Is it worth it? When Taking Initiative hits, it's a thing of beauty- think Deep Knowledge, except instead of having to raise your threat by two, you get to deal two damage to any enemy on the board. Except card draw's power grows geometrically, as each additional piece increases the odds that you draw into another piece and continue the cycle. In a 2-hero deck with Taking Initiative, Daeron's Runes, Deep Knowledge, and possibly the Seeing-Stone (with every other card costing 2 or more), it would not be the slightest bit uncommon to see 15 or more cards in your first planning phase... and likely take yourself out of secrecy range in the process.

At the end of the day, just a poorly-designed card that sounds really fun in theory, but is rarely going to be worth even a fraction of the effort required.

Some Sort 3077
I could see this card just maybe being useful in a two-hero deck once the Strider title attachment is released. If you build a deck that plans on only ever having two characters, your starting heroes, then this card remains playable the whole game. I'm just not sure a 2 character deck is viable, even with loads of attachments. Still, it's something I plan to try, and this card just might fit that kind of deck. — AdmiralACF 34 4/29/16
There is always the option to use this card in decks where discarding a card is a benefit rather than a cost. Noldor and Dwarf decks feature many cards that you want hitting your discard pile. — Edheliad 21 7/14/16
4

This card is frequently overlooked but can be very useful in the early game (especially with a swarm style deck). It frequently hits for me when I play it (usually with 2 or fewer characters in play), and while I may not get to drop 2 dmg on an enemy, I always get 2 cards.

My best play with this was in turn 10 in "To Catch an Orc". I lost most of my board (Outlands) to Mugash and a Methadras Orc, both of whom had the Orc Hunter for their shadow (additional attack). Despite being reduced to 2 allies I drew this card and played it, it hit, damaged Mugash enough to capture him, I drew two cards (including an Ethir Swordsman whose boost put me over the top for the quest phase, allowing me to complete the scenario before the Forced Time effect went off (and I probably lost). Really great card, give it a try!

Unplayable when it was first made, but it's pretty reliable in a Grey Wanderer deck. Although it costing 0 means you can get a frustrating result where one copy discards another to no effect. This card has stuck in my mind as something I wanted to make work ever since I first saw it, it's just a shame it took so long for that to be possible.