Response: After a Dwarf deals X damage to an enemy during combat, deal an additional X damage to that enemy. (Limit once per phase.)

"Beside them Gimli stood with his stout legs apart, wielding his dwarf-axe." The Fellowship of the Ring
Adam Schumpert 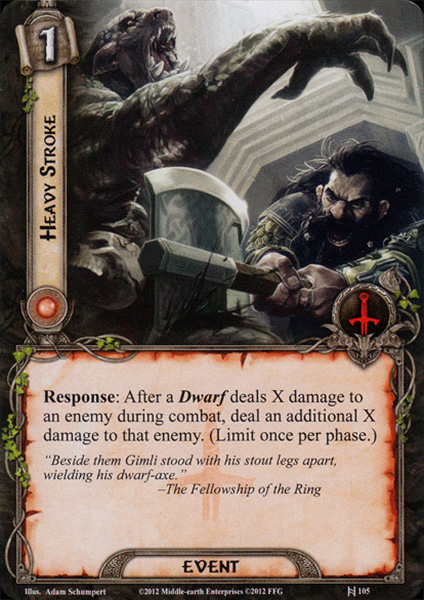 Heavy Stroke is a card which seems like a good idea in principle, but in practice is almost never actually useful. The simplest way to illustrate this is by comparing it to Khazâd! Khazâd!

These could all be overlooked if Heavy Stroke could consistently produce better results than Khazâd! Khazâd!, but while it's possible, it's far from consistent. Consider - Heavy Stroke is based on the damage dealt by the Dwarf character you choose to trigger it with. Now, if you're attacking with multiple characters you can choose in which order to apply their so you can say the other characters' count first to get past the enemy's and then your target Dwarf is just dealing damage, so that's something. But in that best case scenario, you're effectively just doubling the character's attack. So this is only better than Khazâd! Khazâd! if your chosen Dwarf has more than 3 , and to be worth the cost of a resource you want it to be noticeably better. On top of that you have to consider the of the enemy you're attacking. Say for the sake of argument that other attackers get past the enemy's and your chosen Dwarf has 5 so Heavy Stroke is 2 points better than Khazâd! Khazâd! - this still only makes a difference if your target enemy has more than 8 hit points, otherwise Khazâd! Khazâd! will kill that enemy just as well, and cheaper. Now, a search on Hall of Beorn does produce 75 results in a search for enemies with more than 8 hit points, but of those, 16 are immune to player card effects, 1 is immune to player events, and 5 more have a limit on how much damage they can take each round, leaving 53 such enemies across the full life of the game so far where Heavy Stroke could be better than Khazâd! Khazâd! Of course for one more resource you could play a 2 ally who would make up the difference and help you with killing other enemies as well, and the higher we push the hit points of the enemy to try and make Heavy Stroke more valuable than Khazâd! Khazâd! plus one more ally the less suitable results we get. Or for other alternatives, the extra damage could be gotten if your Dwarf's is being boosted by Dwarrowdelf Axes, or maybe you have other direct damage like Goblin-cleaver.

If you do want to try and make use of Heavy Stroke, you obviously need a high Dwarf, which most likely means Gimli with a lot of damage on him or Erebor Battle Master with a lot of other Dwarves. But again it can be problematic because in addition to the aforementioned lack of suitable targets (a powered-up Gimli or Battle Master tends to already be overkill the vast majority of the time), a lot of the time it's going to be more efficient just to focus your deck more on the primary means of boosting your , by giving Gimli more hit points or getting more Dwarves into play for the Battle Master. Including Heavy Stroke will dilute your deck and most of the time it'll be a dead draw.

Heavy Stroke seems like an OK idea, but more careful conideration reveals that it almost never is. You could include it in a quest-specific deck to kill one of the boss enemies who's actually susceptible to it, but in general, the only cases where it would really show its worth are ones where you shouldn't need it, and there are just easier, cheaper and more efficient ways to achieve the same end with other cards.