Action: Return a Silvan ally you control to your hand to search the top 5 cards of your deck for a Silvan ally. Put that ally into play and shuffle the other cards back into your deck. You can only play 1 copy of The Tree People each phase.

No folk could they see, nor hear any feet upon the paths; but there were many voices, about them, and in the air above. The Fellowship of the Ring
Stacey Diana Clark 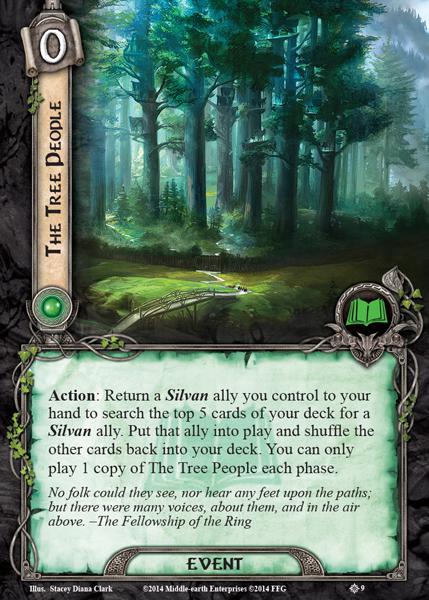 This is really the Silvan card to a significant extent. Silvan decks as developed in the Ring-maker cycle are focused around triggering the various enters play effects on the allies, and returning them to hand with the events to allow triggering those effects (and the boost from Celeborn) again later. The Tree People doubles down on that by removing an ally who can be replayed to re-trigger their effect later, while simultaneously bringing in another ally and triggering their effect.

The standard assumption for playing this card is that you pull back an ally who either is already exhausted or who entered play on a previous round and thus is not boosted by Celeborn any more (or both) and replace them with a comparable ally who by contrast is ready and presumably boosted by Celeborn (I'm assuming Celeborn is in play since he's obviously a Silvan staple, though it's neither guaranteed nor required). But it can get even better, as there's no limitation on cost, so you could return a lowly 1-cost Galadhrim Weaver or Silvan Refugee to your hand and replace them with a 3-4 cost ally like Silvan Tracker, Mirkwood Runner, Marksman of Lórien, Orophin, Rúmil or Haldir of Lórien. Admittedly most of those would not trigger an enters play effect and so you lose out on that aspect which I previousy made a big deal of, but on the other hand you just saved 2-3 resources on what you would've needed to play that ally normally, and those are some good allies. The Tree People also effectively provides card draw by pulling the ally from the top 5 cards of your deck as opposed to the usual ability to only play allies from hand.

The potentially debatable value judgement with the other three Silvan events is whether the benefit they provide is worth the cost of having to replay the ally on a subsequent round - though with O Lórien! and the chance to repeat enters play and Celeborn boosts it'd be hard to argue it isn't worth it. With The Tree People though, the debate simply doesn't exist, because the resources you'll have to spend replaying the ally you return to hand you would otherwise have had to spend on playing the ally you brought in with TTP (maybe even more resources), on top of which you may not have drawn them for a few rounds. It's in the nature of Silvan decks to turn the negative of returning an ally to hand into a positive, but The Tree People just takes away the negative altogether. It's an amazing card for absolutely any deck with a Silvan focus, and the biggest reason a Silvan deck should always have access.