Response: After your threat is raised by an encounter card effect, reduce your threat by an equal amount.

Suddenly he was aware of himself again. Frodo, neither the Voice nor the Eye; free to choose, and with one remaining instant in which to do so. The Fellowship of the Ring
Romana Kendelic 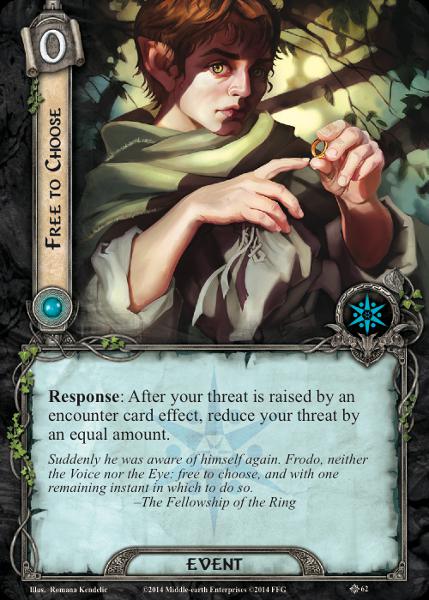 This is a tricky card, but probably better than it's given credit for. A significant point in this respect is that we find another of those cases wherein a card might be a lot better were it not for the existence of an earlier released card which is arguably too good - in this case Elrond's Counsel. Of course it's possible for Free to Choose to reduce your threat by more than the 3 you get from Counsel, but in practice most encounter card effects which raise your threat won't do so by more than 2, on top of which Free to Choose doesn't give you a boost.

Let's consider the card independently of Elrond's Counsel for a bit though. There's a clear downside to this card in that you can't drop your threat at any time, only when an encounter card raises it first. So rather than taking your threat down it merely lets you maintain parity. On the other hand it's completely free. Furthermore, if this lets you maintain parity you can use other effects to actually drop your threat if you want. I might argue the most significant point though is that the natural threat raise from rounds passing, or from player card effects, you can plan for - encounter card threat raises are the ones which throw you off. It happens to me often enough that I form a plan based on being below a certain engagement cost only to have a treachery push me over it unexpectedly. Of course there tend to be other ways of dealing with such problems, but just negating the problem right off the bat is a very simple and effective one.

So, yeah, this is a pretty decent card for avoiding those tricky moments or just generally keeping your threat down while thumbing your nose at the encounter deck. Additional tangential benefit: Hobbit Pipe. If you're playing a Hobbit Pipe deck you need a bunch of threat reduction events and this is one more to add to the pile. That it costs 0 is very handy in that context as well.

Finally, let's look back at that Elrond's Counsel comparison. What points does Free to Choose have in its favour over EC? Well, it has no additional conditions on playing it. That one's potentially pretty significant to the Hobbit Pipe deck idea because if all your heroes are Hobbits then you don't control the unique Noldor you need for EC (ally Arwen works, but that's conditional on you drawing and playing her first. And then, sometimes there are really big threat raises. Free to Choose is perhaps at its best in earlier quests, released well before it was - if you chump-block a Hill Troll you could raise your threat a lot; Watcher in the Water has that Doomed 5 card; Return to Mirkwood has the +8 threat for Gollum's Anguish. There are others, even in more recent quests, though they're not too common. And it is important to bear in mind that while this card could be seen as negating a threat raise, it actually just lowers your threat again after the raise happens, so if the effect would take you over 50, you won't have a chance to play this before you lose.

Bearing all those points in mind though, this isn't an awful card. Just a rather niche one, suited to a limited set of decks and/or certain quests. In the right context, this can definitely work out.

Warden of Arnor 5208
I agree. I think, outside of a Hobbit Deck, it can be a decent 2-of in a sideboard because, yes, it is pretty quest dependent at this point. Does it save you from threating out? As I read it, you would go to 50+ threat and THEN you would reduce your threat. So it doesn't save you from that, correct? — SecondhandTook 533 1/27/17
Yes, correct. I said as much in the review - &quot;so if the effect would take you over 50, you won't have a chance to play this before you lose.&quot; — Warden of Arnor 5208 1/27/17
Real edge case but couldn't this tie in with ally Elfhelm to get a one point threat reduction overall — WolfOfWinter 1 1/28/17
It can. As well as you can play 2 free to choose in response of a same effect :). — Rouxxor 1550 1/28/17
Didn't think of that sadly it's a response or you could have all kinds of recursion madness with it! — WolfOfWinter 1 1/29/17
@Warden wow... my bad. Completely missed that last line :P — SecondhandTook 533 1/30/17
I was going through my cards and did a double take on this one. Why I am not using this as a sub for Elrond's Counsel?!? Sure, definitely not as good as EC, but for those deckbuilders trying to keep a fleet of decks built at all times, this card is completely serviceable. Nice review! — Denison 587 8/16/19