Quest Action: Choose a non-unique enemy in the staging area. Until the end of the phase, progress that would be placed on the quest from questing successfully is instead assigned as damage to the chosen enemy. (Progress must still be placed on any active location first.)

Like thunder they broke upon the enemy... The Return of the King
Emile Denis 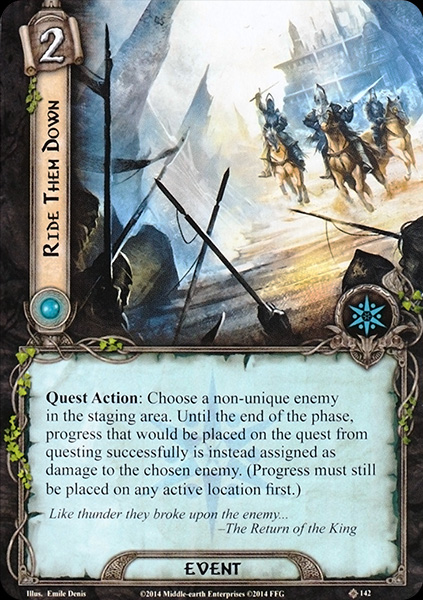 Maybe I’m missing something, but I can’t say I’ve seen this card get a whole lot of love from the community. However, I believe that it does play a vital role in certain archetypes. Location control and questing decks have had limited viability in solo play for a number of reasons. The main one is the lack of combat stats in the allies that those types of decks rely on, since they generally only have willpower in abundance. But what if all that excess willpower was able to somehow pull its weight in the combat phase? Ride Them Down accomplishes just such a feat.

Too many questers on the table? Simply commit them all, slap down this card, and watch the enemy fade away. This is the utopian scenario, but let’s take an in depth look at the specifics of the card. It’s cost of two resources may seem steep on the surface. However, those two resources can potentially save you up to two or three actions. How so? At least one character will be needed to defend, possibly more due to shadow effects. Then, in a control focused deck, it is unlikely that you will have many heavy hitting combat characters lying around. It will probably take two or even three to do away with the enemy. Ride Them Down enables one to save the action used on defense. Then, it allows one to save the action(s) that would have been required to take out the enemy’s defense points. What’s left is an even swap. The same number of attackers required to take out the enemy’s hit points becomes an equal number of questers who can do the same thing via Ride Them Down. In a control focused deck, that quester may have already been committed regardless of whether Ride Them Down was played or not.

Although it needs the right situation to really shine, Ride Then Down is a stellar option for a deck that lacks high firepower but has an abundance of willpower. Outstanding in early to mid game when one has limited actions and a meager board state, this event has been both a game saver and a game changer.

Swordthatwasbroke 614
This card is truly incredible — NERD 522 6/21/22
it is! very thematic and extremely useful when you have a boss enemy sitting in the staging area. Another great way for spirit to deal with enemies (reminds me of helm! helm!) — BlackArrow 250 6/22/22
Just remember it doesn't work on unique enemies, like most boss enemies, unfortunately. — Turttiman 1 8/27/22