You must use resources from 3 different heroes' pools to pay for this card.

Action: Discard each shadow card from each enemy in play.

At that moment he caught a flash of white and silver coming from the North, like a small star down on the dusky fields. The Return of the King
Jordy Lakiere 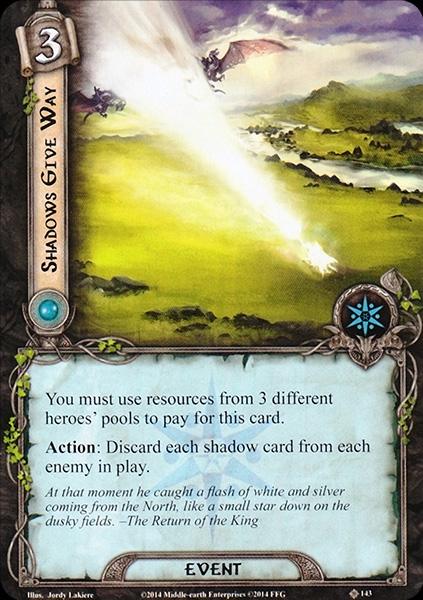 Obviously a powerful but limited effect. Of note however is that "You must use resources from 3 different heroes' pools to pay for this card" is not the same as saying this card can only be played by mono- decks. It allows for icons gained from Song of Travel, Celebrían's Stone or Vilya, or the possibility of playing it in any deck via A Good Harvest. It does admittedly mean this card cannot be played by decks with less than three heroes, but that aside there are ways around the limitations.

Arguably the effect is also limited - not in scope, but in relevant applications. It's clearly primarily of use to games with higher player counts which are likelier to have more enemies attacking and thus more shadow cards in play than games with less players. In solo you're unlikely to ever have enough shadow cards in play for this to feel worth it, and even in two player probably not unless you're playing a quest which really swarms enemies and/or deals multiple shadow cards (or both).

Leaving those points aside, how useful is it? Well, discarding shadow cards ensures that the outcome of combat is entirely predictable - you know exactly who will take damage defending and how much. On the other hand how bad are shadow effects in general? Often they're entirely manageable with one or two exceptions which can be cancelled with Hasty Stroke, Balin, or Erkenbrand. On the other hand this comes down again to the question of how many shadow cards you're dealing with at a time - the more there are, the more likely you are to not have quite enough cancellation one way or another. Perhaps the most obvious more widely applicable context for making use of this card would be in a Dúnedain deck which isn't sure it'll reliably produce enough Forest Snares and will thus have to keep defending the array of enemies it's keeping engaged. Bonus points if this Dúnedain deck is also being played against a quest which enemy swarms and/or deals multiple shadow cards. Then it could be entirely plausible for such a deck to find itself engaged with, say, 4 or more enemies at a time (I know I've had Dúnedain decks engaged with as many as 7 enemies at once, and that was only in 2-player), at which point the option to sometimes just eliminate the random element of that combat could make circumstances a lot more comfortable to deal with. Of course if said deck includes a hero they could just get a Silver Lamp instead so they know exactly what shadow effects they're facing every time, but if there enough bad shadow effects maybe you might want Shadows Give Way as well as a backup option.

Probably the best place for this card is when playing against The Battle of Carn Dûm, which has a lot of enemies, has effects which deal additional shadow cards to those enemies, doesn't discard unresolved shadow cards at the end of combat on stage 1, has a higher proportion of shadow effects in the encounter deck than the vast majority of quests, and has those shadow effects trigger additional effects (Thaurdir flipping being obviously the most prominent). There are certainly other possibilities though.

All in all, I would say that as with most or all cards which deal with shadow effects, Shadows Give Way is often something you want to swap in and out of your deck based on your knowledge of the encounter deck of the particular quest you're playing, and in this case perhaps also the number of players in the game. Against some quests and with less players it may well seem superfluous, but against others and with more players it could be a serious lifesaver on a significant round.