If each hero you control has the Hobbit trait, damage from undefended attacks against you may be assigned to Barliman Butterbur.

"But spooks or no spooks, they won't get in The Prancing Pony so easy." The Fellowship of the Ring
Owen William Weber 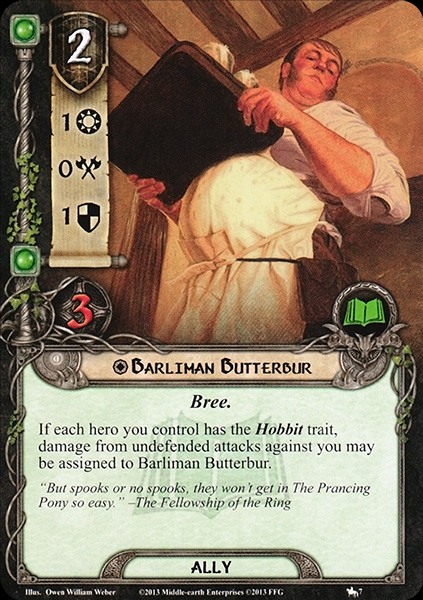 Basically an auto include in hobbit decks with all hobbit heroes(which are most of them) because the Good Bartender covers a very useful ability for the little guys. His ability allows the squishy hobbits not to worry so much because with him in play, they have a back up plan. Losing a hero could devastate a deck that you are playing as they provide resources each round, their stats, and their useful abilities. So keeping a hero alive is very important in a deck, and Barliman Butterbur provides the support we need for the hobbit decks.

His ability is similar to Dori and Frodo Baggins in that he can absorb damage. One good thing about his ability is that it doesn't require you to exhaust him to use the ability because it is passive which let's you commit to the quest.

Although, one thing to consider is that his ability ONLY works if all of your heroes are hobbits, which limits your options a bit. It would be a lot better if the requirement was that it only worked for hobbit heroes which would allow us to include it other decks containing a hobbit hero such as Frodo Baggins. But...most of the time, hobbit heroes only appear in full hobbit decks anyways.

Now, let's look at his stats. 1 is good considering his function is to soak damage, 1 could allow you to take a attack with him if you didn't want to go undefended, but the 3 is great. It is a good amount of , considering we only paid two resources for him. The health is a good amount because the hobbit heroes only have 2 or 3 health anyways so you might survive. I'm not 100% sure if this is how it works but if I take an undefended attack with Merry(who only has 2) and the enemy has 3 and I put the damage on Barliman Butterbur, would he take 2 damage or 3? Merry's max is a 2 so how would that work? Anyways, the stats all add up to five which is right on point on what the proper price would be for a 2 cost ally.

One bummer about him though is that he doesn't have the hobbit trait, but rather the bree trait. This means Tom Cotton's extra won't affect him, Raise the Shire can't bring him in for a phase, and Elevenses can't use him to reduce our threat.

All in all, I you are gonna build a hobbit deck I wouldn't overlook this guy as, like with hobbits, there is more to him than there seems to be.

FolcoBoffin 248
He would take 3 damage. Barliman Butter doesn’t take undefended damage on behalf of a specific hero, he just acts as an additional option when choosing who receives the undefended damage. — Nystrum 29 8/19/22