Coney in a Trap

Response: After you engage an enemy, that enemy cannot attack you until the end of the round. 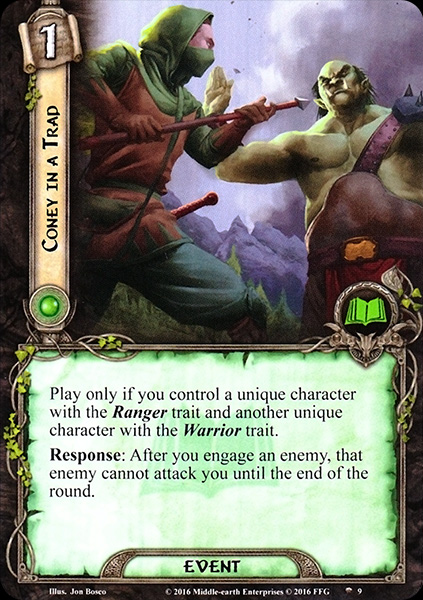 Avoiding enemy attacks is always more profitable than merely finding ways to defend them, as shadow cards or occasionally forced effects can no longer throw a wrench in your game plan. I would like to think of Coney In A Trap as the gold standard at achieving this, even better than Feint, which has been god-teir since the Core Set. The reason is simple. Coney In A Trap keeps an enemy from attacking you for the entire round, not just one phase. This is powerful. Think of enemies like Thaurdir, who are attacking multiple times per round over multiple phases. Coney In A Trap just laughs these into oblivion. In quests where having a boss attack you multiple times per round is a large part of the challenge, this card can skew things heavily in your favor.

However, there are two limitations for this card, which cannot be ignored. The first is that it requires a unique Ranger character and a unique Warrior character. Now these traits are relatively common, but this does mean that the card is restricted to a much narrower selection of decks then would otherwise be the case. The second limitation is that it can only be played after an enemy engages you. This is the big one, and definetaly brings the value of the card down a notch. Unlike Feint, which is a simple plug and play, Coney In A Trap requires careful timing. Thus it lacks versatility, but that does not mean that it's hard to use. There are meany boss enemies that cycle in and out of engagement. Additionally, those hated shadow cards that return the attacking enemy to the staging area allow you to play this card. Finally, early in the game when you may be unprepared to handle an enemy that showed up too early, Coney In A Trap delays the onslaught for one more round. It combos well with cards like Wait No Longer or Dunedain Hunter, and in certain cases can counter cards that cause each engaged enemy make an immediate attack.

As a straight up attack canceler, I think Feint ranks slightly ahead just based off of no conditional requirements. However, Coney In A Trap provides another element to shenanigans that can be pulled off, and certainly has the potential to be much more powerful.

Swordthatwasbroke 158
This card is not very useful against Thaurdir since it never actually engages a player, it's merely &quot;considered to be engaged&quot;. Besides many of the big boss enemies which might attack during different phases are immune to player card effects or don't leave the staging area having the same problem I mentioned with Thaurdir. — Alonewolf87 533 4/20/20
I think it does work against Thaurdir. He's considered to be engaged, which means he functions as an engaged card. For example, if an encounter card instructs all engaged enemies to make an immediate attack, Thaurdir would make an attack because he is considered to be engaged. Similarly, he counts as an engaged enemy in respect to Dunedain benefits. According to the rule book if an enemy becomes engaged to a player for any reason, then the player has engaged it. When Thaurdir enters play he is considered to be engaged, which means the player has for all intents and purposes engaged him because he functions as an engaged enemy, allowing the player to use Coney in a Trap. — Bbc 1 6/20/20
From the faq: &quot;An enemy that does not leave the staging area but is considered to be engaged with a player does not actually engage that player, nor does that player engage it. In order for a player to engage an enemy, the enemy card must physically enter his play area.&quot; so doesn't help against Thaurdir. — aermet69 1 6/21/20