Each Harad character gets +1.

Refresh Action: Exhaust Kahliel's Headdress to shuffle the topmost Harad ally in your discard pile into your deck. 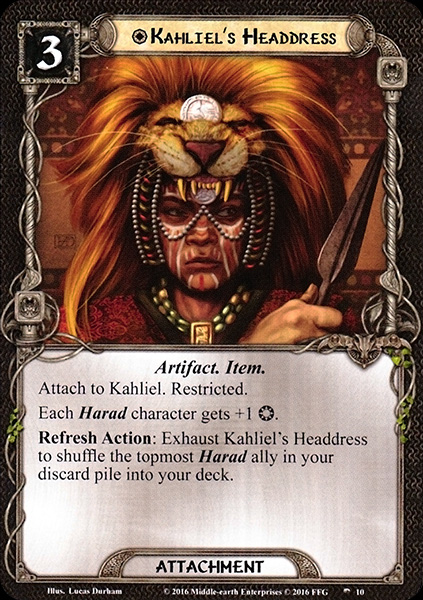 I love this card so much. Perhaps I'm biased because I love the desert Harad expansions, but to me it's a sweet card. The art is amazing and so is the ability. Kahliel has an ability that allows you to discard a Harad ally from your hand to ready a Harad character in play. The Headress basically cancels that action. So you discard a Harad ally from your hand (it might even be a useless copy of one of the unique Harad allies, who are already on the table) ready a Harad character in play, then exhaust the Kahliel's Headdress and shuffle it back into your deck. It could be a problem if the ally you put back into the deck was a unique ally (Firyal, Jubayr, Yazan) that is already in play, because it's a dead card when you draw it, but you can always discard it again to ready a Harad character. I haven't even got to the boost. Each Harad character gets +1 is huge. That could be 5-6 extra , or 1-2 , but that can still make a huge difference. It is a shame that it's restricted, so Kahliel can only have 1 weapon, shield, whatever, if the Headdress is in play. '

Who it works with: