Folco Boffin gets -1 threat cost for each Hobbit hero you control.

Action: Discard Folco Boffin to reduce your threat by 7. (Limit once per game.)

...he had a good many friends, especially among the younger Hobbits (mostly descendants of the Old Took)... -The Fellowship of the Ring
Owen William Weber

The Dungeons of Cirith Gurat #109. Lore. 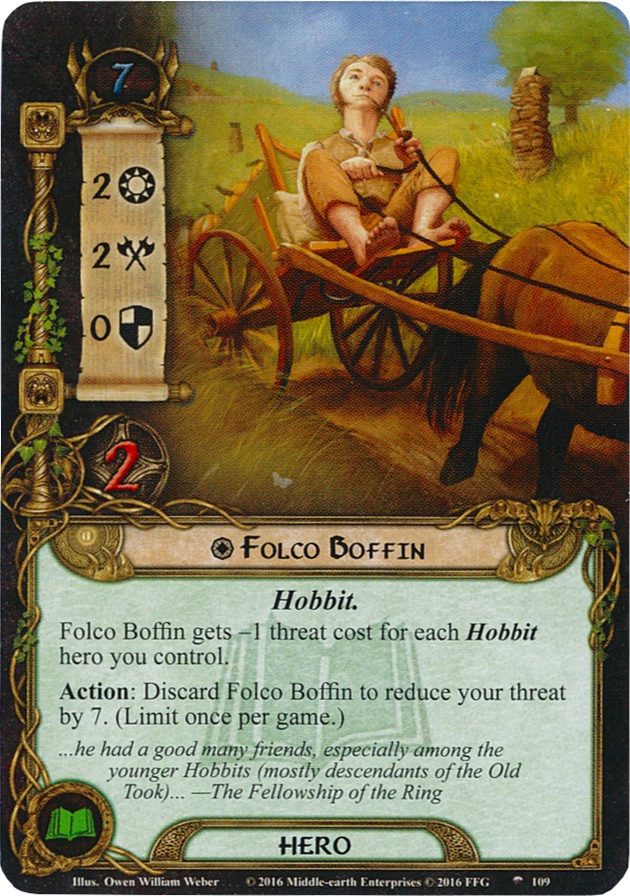 He just came out and I already bought the expansion. Obviusly, he is made for secrecy/ hobbit decks, and works awsomly in them. If he is included in a 3 hero hobbit deck, then his starting threat becomes a 4! That's the lowest in the game, and if you are playing a saga with Bilbo or Frodo and you start as the first player, then he becomes a starting threat of 3! That means you can use 2 higher threat Hobbit heroes with him like Sam Gamgee or Tom Cotton.

His second ability seems quite good but I haven't had a chane to use it yet. It seems like it is supposed to be used so you can stay in secrecy. It acts similar to The Fall of Gil-Galad and is a profit in Hobbit decks considering that you start at 4 and discard him to reduce your threat by 7. A profit of -3 threat than if you didnt use a 3rd hero! Or a -1 profit if you didnt use 2 other hobbit heroes!

FolcoBoffin 163
Folco Boffin, meet Folco Boffin! — Wandalf the Gizzard 1251 12/20/17
This guy is basically an auto-include in most previously two-hero decks (except eg Loragorn ones). You can use him the first turn to pay for Strider (or any other Lore/Neutral card), then discard him to be 1 resource and 1 threat better off than if you hadn't included him at all. And if you didn't draw any secrecy/two-hero cards in your opening hand then he can stick around for an extra turn or two as a much needed boost. Should make all such decks a little faster and a little more reliable. — richardplunkett 14 12/29/17