The Fall of Gil-Galad

Limit 1 per deck. Attach to a hero.

Response: When attached hero is destroyed, add The Fall of Gil-Galad to the victory display to reduce your threat by X, where X is the attached hero's threat cost.

...for into darkness fell his star
in Mordor where the shadows are.
The Fellowship of the Ring
Arden Beckwith 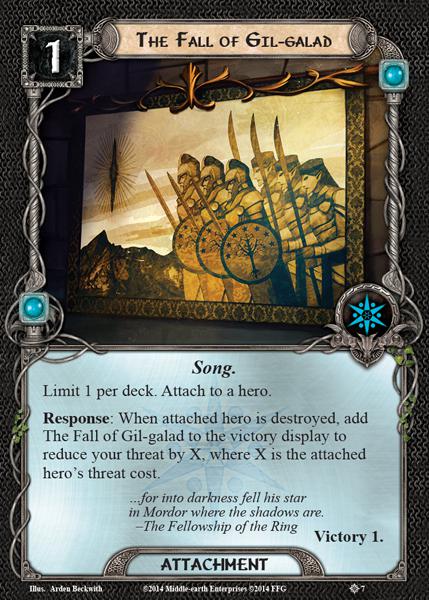 This is a card most people just dismiss as a coaster without giving it a second glance. It's easy enough to see why, but personally I put this card in the 'difficult to use' category rather than actually bad. I also picked it out as one of my top 10 favourite cards I never use. Given the difficulty in making it work, I obviously don't pull it out too often, but the two cases where I have it has worked out incredibly well for me.

The obvious place to start is of course, why is this card so difficult to use? The answer is that it requires you to lose a hero to gain the benefit - more than that, it specifically requires the hero to be destroyed, so you can't combo it with discarding Caldara. The one hero where you might generally plan on them getting destroyed is Beorn, who can't have attachments, so there aren't any particularly obvious targets at first glance. And the other downside of course is that inconvenient "Limit 1 per deck." That one you can kind of get around though, with Master of the Forge perhaps, or definitely with Rivendell Minstrel. The big problem is the need to kill a hero. That said, there's definite value in the consequent effect. There are two ways to look at using this card - one is assuming the hero will remain dead, the other is assuming you'll bring them back afterwards. Let's consider them separately.

So, firstly, what if the hero remains dead? Well, then you're now playing a 2-hero deck, with corresponding threat since you've reduced by the threat cost of your now dead hero. That's not necessarily a problem though. Two hero decks can be made to work, and in particular they've gotten some support in the Dream-chaser cycle in the form of Strider and Vanish from Sight. Of course, one might ask, if you want to play a two-hero deck why not just build a two-hero deck in the first place? The thing is, this way you have a third hero to help out at the start of the game (generally the most difficult point when you're most likely to want that extra resource and action), then sacrifice them to turn into a two-hero deck with all the corresponding goodies once you're already somewhat set up. The one downside is that one thing you're liable to get from running a two-hero deck is access to Secrecy, which you may lose to threat raises while you're establishing a board-state and digging Fall of Gil-Galad out of your deck - though of course Vanish from Sight can get you temporarily back in Secrecy regardless. If you're taking this option then there's less pressure to specifically sacrifice a high threat cost hero to get maximum reduction - in fact I'd say more emphasis should be put on how much the hero can do for you in the time before they're sacrificed - a focus should therefore go on heroes with significant early-game impact. Treebeard is a good one since you can use his ability with reckless abandon to make quest progress or kill enemies, knowing it won't matter in the long run, and potentially you can even use his ability to have him kill himself if you don't have a convenient enemy available when you want to do it. Any hero with a setup ability seems a good candidate - Denethor could play some early cards (e.g. Steward of Gondor) and/or give away his starting resources to give you a head-start before dying; Galdor of the Havens can get you a better opening hand, and if you have some means of emptying your hand you could trigger his once per game draw 6 as well before killing him; Éowyn's 4 will be very impactful early on, and either you can use her boost to kill a dangerous enemy or sacrifice her without triggering it, with the result that thanks to her setup ability the two-hero version of your deck will be running at -3 threat compared to what it would be if you just built it as a two-hero deck. Following the Galdor once per game idea, Aragorn could work, perhaps in a deck that ramps up fast with Doomed - ramp up (hopefully including drawing your useful two-hero cards), reset to starting threat, then kill Aragorn with FoGG attached to drop your threat down. There may well be other good options, but those are the ones which really spring to mind for me.

An alternative option to the three-hero/two-hero bait-and-switch in the modern card pool would of course be to play the ally version of Prince Imrahil, so you'll still have three heroes generating resources and all you've lost is the stats of your dead hero, and of course their threat.

And now we turn to the possibility wherein you don't leave the hero dead, but bring them back afterwards. In this instance obviously it's best to use a high threat cost hero. In this instance though, while Fall of Gil-Galad itself costs only 1 resource, all means of reviving a hero cost 5, meaning you're effectively paying 6 for the threat drop, at which point in the vast majority of cases you'd be better off just playing The Galadhrim's Greeting twice. However, there are ways around this. Say your hero-revival method is Landroval - he can be cheated into play with Sneak Attack or Elf-stone, at which point the cost seems much more impressive for that large threat reduction. All possibilities could be played for no resources via Vilya of course. Finally of course the recently released card The Houses of Healing can have its cost reduced by exhausting healers. Given that if this hero is taking a bunch of damage, if they didn't die you might well want to heal them up anyway, you may not even be losing out on that many actions, and you're getting a big threat drop out of it, so this definitely seems like a viable option. The one big remaining difficulty is that of course if you plan to kill off a hero you shouldn't give them any (other) attachments as that'd be a waste of resources in the long run, but the high threat cost heroes who will give you the biggest benefit for doing this are quite likely to be heroes you want kitted out with attachments. It's certainly doable though.

One final note is that while FoGG is limit 1 per deck, it is not unique. So if you build a multi-deck fellowship around this (or just convince a friend to stick a copy in their deck for you), you can double, triple, or even quadruple the threat reduction, which makes it distinctly better value whether you subsequently revive the hero or not.

Fall of Gil-Galad is certainly a difficult card to use, and it must be admitted that when it was released it didn't have so many good applications as it has now. But even then it was potentially useable for some pretty potent shenanigans, and with the ways the card pool has expanded now, this is a card which I think deserves some definite reconsideration by many of the people who have dismissed it in the past. I know I'm now tempted to try and build decks around two or three of the ideas I mentioned in this review.

Warden of Arnor 5208
Love this card on Treebeard hero! Used it to great success when I paired him up with Gandalf and Elrond Vilya deck. You start at 40 but being able to use this card on Treebeard means our Ent friend can activate it and die, drop your threat down a whopping 13, then instant Vilya a Fortune or Fate or Houses of Healing to pull a Groot and bring him back swinging in time for the combat phase. It was a key card for those three heroes in my solo one-handed saga campaign. — Christian_Medic 869 8/15/19
And right now it can be great in Saruman decks — Alonewolf87 1655 6/17/20
afaik &quot;destroyed&quot; means dying of to much damage during an attack. So basically you have to defend with a hero who has its benefit by questing and attacing — Flrbb 165 6/18/20
Here's a beef I have with this card, the quest it is included with is one where you are explicitly trying to not let a hero be destroyed. They give us new things to play with and say, &quot;not today, save them for later&quot;; just like opening Christmas presents at Grandma's house! — Quetzal513 77 3/3/21
I think leaves play would make it better. — Truck 1258 3/3/21