While unattached, attach to the next eligible enemy that engages you.

The Crossings of Poros #139. Tactics. 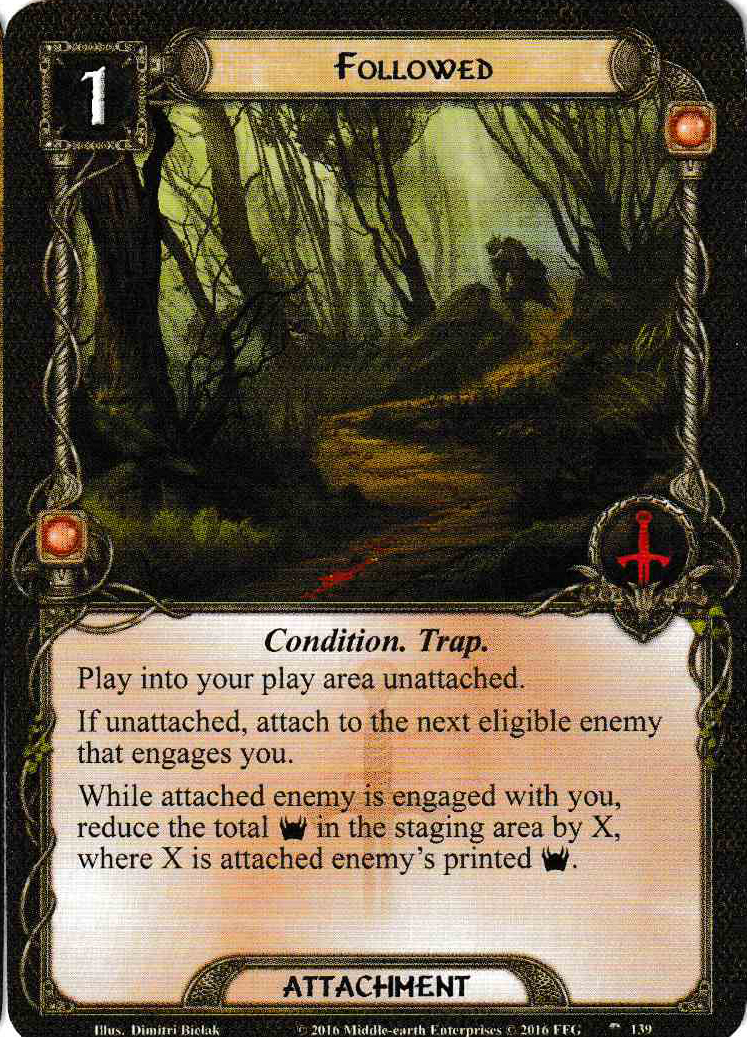 This card more than any other has probably "fixed" a lot of solo Trap and Dunedain builds. It essentially functions as forcing an engaged enemy to "quest" for you...atleast to the point of neutralizing existing staging threat. Slap 2x of these on a 2-3 threat enemy and then hit them with a Forest Snare and in most scenarios, this enemy now has become a "dedicated quester" subtracting 4-6 threat from the staging area every round.

The other great thing about this card is that it's generally a little easier to target the enemies you want to hit with it than most of your traps like Ranger Spikes or Poisoned Stakes. One downside of many conventional traps is that they automatically attach to the first enemy entering the staging area, which is generally something you don't have a lot of control over, and are typically trapping blindly without the benefit of scry cards like Henamarth Riversong or Interrogation. Enemy engagement, however, is something that the player has much greater control over, increasing the chances that you land this trap on the enemy you actually want it on.

The best part though is that it is custom tailored to give solo Trap and Dunedain builds the very thing that they traditionally have struggled with, early and mid game questing power. Combine it with Emyn Arnen Ranger and suddenly it feels like double dipping on willpower. Dúnedain Hunter also goes fantastic with it, allowing you to "hopefully" peruse the encounter deck for an enemy of choice to bring right into engagement.

It's a card that certain builds in the card pool have needed for a very long time and I'm VERY glad to see it.