Each hero you control with a printed resource icon gets -1 threat cost.

"...the Elves feared and distrusted the world outside..."
The Fellowship of the Ring
Magali Villeneuve 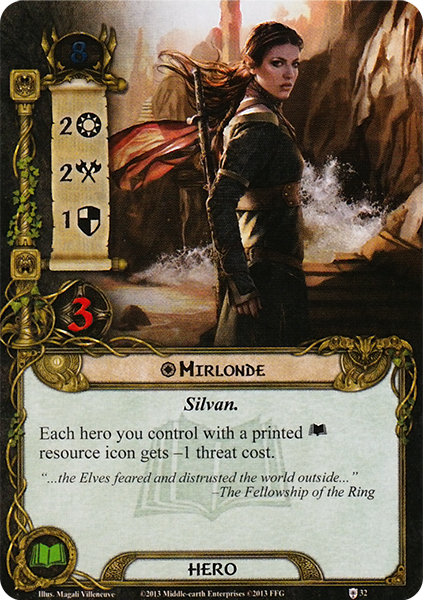 Mirlonde is one of my "go-to" heroes. She may not be flashy but she's solid enough that she's perfect for decks that want additional resources without having to deal with Songs or high threat. Decent on her own, she really shines as the second or third Lore hero. Her two and allow her to contribute reasonable to questing or combat.

It's worth noting that she benefits from her own effect, so despite her printed threat cost of 8 her actual threat cost is 7. In this respect she ends up being something like a low budget Glorfindel, an effect that's magnified if she's played in mono-Lore since her effective threat cost is the same as Glorfindel's, albeit without his impressive stats but also without his nominal drawback. Her Silvan trait even allows her to take advantage of Light of Valinor.

Lore is definitely the sphere I play most frequently, and while Mirlonde isn't exactly exciting she's a solid hero that helps keep things manageable while still being able to contribute. While she frequently ends up as the "disposable" hero of the bunch her in-sphere access to Silvan Tracker.

The only Lore hero with less than 7 threat is Pippin, and the only other 7 threat hero is Bifur. Pippin has a more interesting collection of abilities, and is probably the better choice for a deck that wants access to without adding too much threat, as they both have two , but if you're including a second Lore hero or cards that play off the Silvan trait then Mirlonde is a great choice. Mirlonde is probably also the better choice for quests with lots of direct damage, as the difference between one and two is bigger than it might seem and Silvan Tracker automates healing while also providing a decent defending body (especially when given A Burning Brand and Cloak of Lórien.)

I've had huge successes with both Mirlonde- Celeborn-Haldir of Lórien and Mirlonde-Haldir of Lórien-Rossiel decks. More generally, she's my go-to choice when I'm planning any deck with two or more Lore heroes.