"Does he think that men sleep without watch all night?" Faramir, The Two Towers
Kristina Carroll 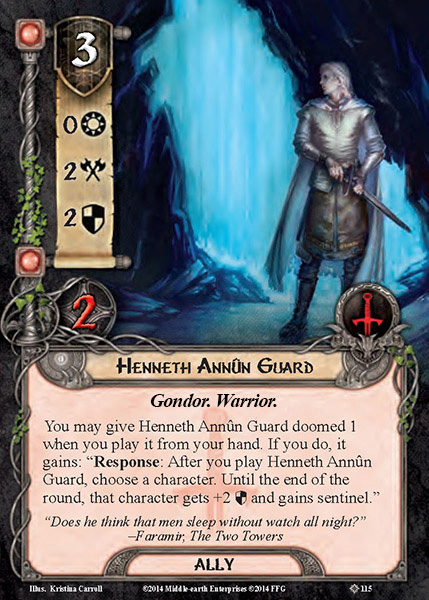 Henneth Annun Guard is a card I really want to like. When I first saw it I was very positive about him, but I'm not sure if I've ever actually used him in a game. It's something of a common problem among the optional Doomed cards that they'd clearly be worth it if their optional Doomed effect was just an innate ability, but requiring an extra cost for it makes it less appealing. The Henneth Annun Guard might be debatable even on that front, but he'd certainly be a bit easier of a prospect were that the case. The optional Doomed is certainly valuable - it's essentially a one-shot use of ally Arwen but slightly better since it's +2 instead of only +1. Since a lot of decks can depend on Arwen's ability to grant Sentinel if not so often the boost, the Henneth Annun Guard could be useful as a backup measure if you don't draw Arwen in a timely fashion, or of course now a lot of the time hero Arwen will be in play so this may be used as a partial substitute (or a backup measure if you don't draw Dúnedain Signal in a timely fashion). An odd but effective use of this ability could be if you want to use Valour - Doomed obviously synergises well with Valour, and in particular granting Sentinel to another character would allow you to get more bang for your buck with Hold Your Ground! The biggest disadvantage of the ability is that it's a one-shot and has to be triggered in the planning phase, where depending on decks and quest you may find by the time combat arrives that the boost might have been better applied elsewhere. For all that though, it's only Doomed 1, which is very manageable. So why doesn't this guy see more play?

Well, he costs 3 resources. That's always difficult. It's a whole round's worth of resources in mono-. As useful as his ability is, since it's a one-shot it's not something you're going to be depending on and therefore build around, so you have to assume you can manage without it and so if you can manage without it why bother including it when it comes attached to a costly ally? But the big problem lies in his stats, and relatedly in the way people tend to build their decks. 0/2/2/2 isn't a bad statline for a combat ally by any stretch of the imagination. 2 and 2 isn't going to survive much as a defender, but it's still certainly usable, and 2 is certainly useful. The thing is though, it's a versatile statline rather than a focused one, and while I'm an advocate for versatile statlines, I advocate them much more on heroes than I do on allies, because heroes are always there while allies you have to draw and play. And that's how people build their decks, rather than include one ally who can attack or defend as needed they're more likely to include two allies, one who can attack and one who can defend - especially since the sphere includes such cost-effective options as the Defender of Rammas and Galadhon Archer in this regard (not to mention the cost curve skewing nature of the Dúnedain Hunter). When you can get the or you need for cheap, you don't necessarily want to splash out on a more expensive option who is more flexible but not quite as good at either.

With all that said, I think the time may be ripe for a re-examination of the Henneth Annun Guard. I do like the ability, potential for strong ally defenders has definitely expanded since his release, there's that tantalising Valour Hold Your Ground! possibility to consider; and most significantly, a flexibly statted combat ally with the Warrior trait seems made to be combo'd with Raiment of War and perchance Narya, so his potential stock has definitely risen noticeably since his release.

Warden of Arnor 4385
I think the high cost is his biggest drawback. At a cost of 2 I think he is much more playable and can help get players on their feet if there is an aggressive encounter deck. An already strong defender can take on an even nastier attack for a turn or a weaker ally can help mitigate some of the attacks, getting the weight off of another key defender. And you can get an ally on top of that! Those 3 resources though... — SecondhandTook 461 1/10/17
I believe Hennath Annun guard was released in the pack after tactics Mablung. I can see a certain synergy there with Mablung making it more affordable and the guards doomed effect turning Mablung into a decent defender... — WolfOfWinter 1 1/25/17