Response: After Guardian of Ithilien enters play, return an enemy engaged with you to the staging area.

From such men the Lord Denethor chose his forayers…to harry the Orcs and other enemies that roamed between the Ephel Dúath and the River.
The Two Towers
Taylor Ingvarsson 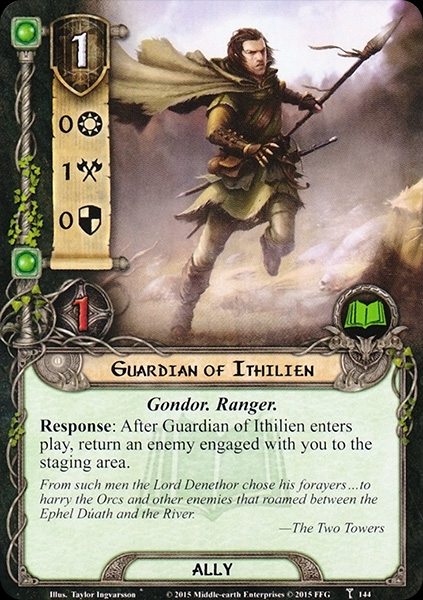 My first thoughts on this card: trash. Bike spoke fodder. But after much play, and having the Guardian of Ithilien single-handedly save my game once, my opinion has changed drastically.

Let's first look at his stats. Cost 1 is very nice, especially for a Lore ally. 1 attack is acceptable, can be boosted by Boromir. One hit point makes him pretty fragile. But without his ability, where the Guardian of Ithilien really shines is actually his traits. The Gondor trait has many effects that can boost the Guardian's stats, especially the before named Boromir and Visionary Leadership. The Ranger trait is also very helpful, as it allows him to wield a Ranger Bow or the in-pack Ranger Spear. In my opinion, then, the Guardian of Ithilien is justified for a deck even WITHOUT his ability! Guardian of Ithilien with a Ranger Bow is actually what won me Shelob's Lair once.

Now, the ability is icing on the cake. It works very good with a Trap deck, which wants enemies in the staging area to snare them, and also staging area attack decks. One final note: the in-pack hero Prince Imrahil works great with the Guardian as it can essentially act as A Light in the Dark or Feint if pulled out by Imrahil's ability.

What are your thoughts on the Guardian?

bobbymcbobface 623
Yes. 1 cost for 1 attack, in Lore especially, is wonderful, but it's the Ranger trait that really makes the Guardian shine. All those cards that require you to exhaust a Ranger--Expert Trackers, Ranger Bow, Guarded Ceaselessly--suddenly have a 1-cost chump to activate them. Guardian of Ithilien is the ally non-Trap Rangers were waiting for. — AlasForCeleborn 525 8/28/20
Sneak attacking him in to avoid Morris in the Conflict at the Carrock is incredible — LEGOlas 107 1/25/22