Action: Draw 1 card for each Pipe you control. Heal 1 damage from each hero with a Pipe attachment. 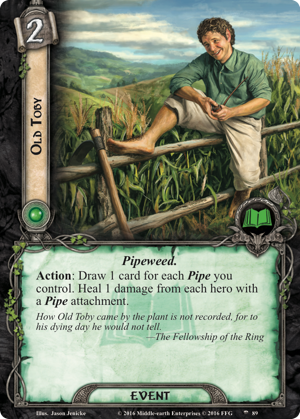 This card is super effective!... in pipe decks. It is pretty bad in decks not dedicated to the smoking pipe archetype as most of the time you could be paying 2 resources for one card and one damage healed.

On the other hand, in a pipe deck it becomes one of the mvp's of the deck. I included it in my song and pipe deck and ended up drawing four cards or more with it and healed my heroes. It works well along with Smoke Rings to provide a lot of momentum to the deck later in the game. It works with Hobbit Pipe, Wizard Pipe, Dwarf Pipe, and Dúnedain Pipe, all of which are in the proper spheres for these two archetypes.

Hobbit pipe also combos with Smoke Rings so the song and pipe archetypes work together so well.

Also, the picture is incredible. It just looks awesome and is so well done.