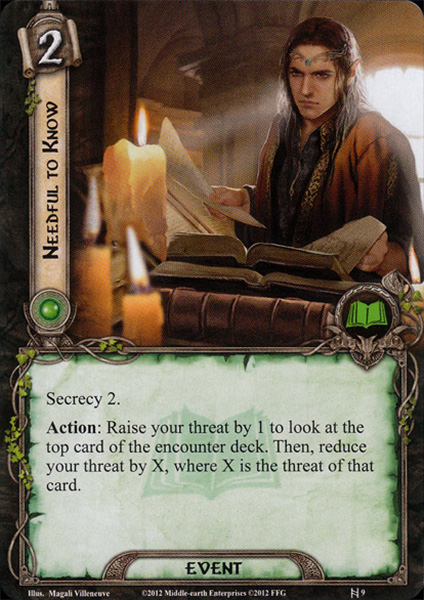 First off, something needful to know about this card; it is not scrying and threat reduction in one.

Let me explain. Scrying is primarily useful when knowledge of the encounter deck is uncertain (i.e.; you use it to know what's coming up in the turn ahead.) This means that, logically speaking, you should play Needful to Know when you have no clue what's on top of the encounter deck.

Threat reduction, however, is primarily useful when it's consistent. When you play a threat reduction event, you want to know that it is going to drop your threat enough either to avoid threating out or an unwanted enemy engagement. In addition, for the majority of decks, just like resources or card draw, the more you reduce your threat the better off you'll be. This means that, logically speaking, you should play Needful to Know when you know exactly what is on top of the encounter deck.

The key to using Needful to Know effectively is to decide which of the two functions you want to focus on more. If you want to use it for scrying, include other methods of threat control and content yourself with lowering your threat by 2-3 overall. If you want to use it for threat control, pack other scrying so you know when to play it for greatest effect. Don't try and make Needful to Know be both things at once; it's not that Needful to Know isn't strong enough to fill both needs, it's that no card can ever manage to solve the paradox Needful to Know raises, where in order to reach its maximum effectiveness it is needful to know both nothing and everything about what the top card of the encounter deck is at the same time.

Either that or play it with no knowledge of the top card of the encounter deck and pull off a thematic win by doing something Tolkien himself did; pray.

AlasForCeleborn 464
A perfect complement to this card (which doesn’t exist) would be one which places a random enemy or location on top of the encounter deck. Then the scry would be useful and you’d have guaranteed threat reduction. It’s only the treacheries (or uncommon X threat locations/enemies) which cause the threat reduction to miss. — GrandSpleen 1289 7/12/20
For me, it's card draw and threat reduction. This triggers the hobbit pipe, and works wonder in a support deck with some scrying. With this and shire-folk, you don't have to play the expensive smokerings. — Tegyrius 113 7/12/20
Shadow of the Past could be interesting with this card. Not better than other Lore scrying effects, though, I'm sure — Turgon 306 4/12/22
4

Needful to Know is one of the few secrecy cards that could plausibly be used out of secrecy. Free scrying and threat reduction (to stay in secrecy longer) is very good, but even outside of secrecy; if you're running other scrying effects, this could be used to great effect coughgladdenmarshlandscough. Just off the pop, two resources for a quick scry and a bit of threat still isn't bad.

Wandalf the Gizzard 1843
It could be very useful in combination with Henamarth Riversong for threat reduction. — Mad Morderan 109 5/19/18