Action: Exhaust Ravenhill Scout to move up to 2 progress tokens from 1 location to another location.

"They made their first camp on the western side of the great southern spur, which ended in a height called Ravenhill." The Hobbit
Garret DeChellis 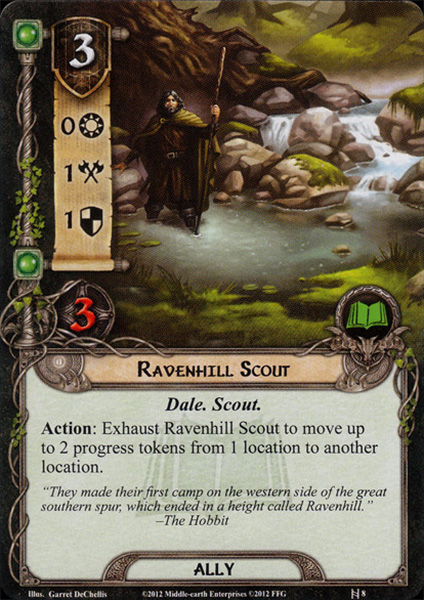 Ravenhill Scout is one of those cards that has a subtle effect that can often be useful, but is to expensive to maintain. A whopping three resources in Lore for an ability that is not immediately progressive is not a good deal. Granted, the scout could pass as an attacker or defender, but you're really just going to be using him for his ability. Otherwise, why include him? He could fit into a scout deck, but I think his only hope is in the new Dale stuff for the upcoming cycle.

For this review, I'm going to need to link to a review over at ThronesDB. Here's the link thronesdb.com now here's why it's important:

Ravenhill Scout is one of the two most game breaking cards in all of LotR.

You see, his ability targets the progress tokens, not the locations themselves, as per the Tears of Lys ruling. Therefore, also going by the Tears of Lys ruling, he can move those progress tokens to a location with "Immune to player card effects," because he's targeting the tokens, not the card. Locations that are immune to player card effects are Northern Tracker proof, Rhovanion Outrider proof, and Asfaloth proof, but not Ravenhill Scout proof. This is a heady mix of stupid and hilarious, one of the arguably weaker cards being able to absolutely destroy one of the encounter deck's strongest abilities. It's potentially even more ridiculous if "moving" progress doesn't count as "placing" progress, because if it doesn't Ravenhill Scout also gets around "Progress cannot be placed on this location while it is in the staging area."

The other top game breaking card is Infighting, if you were wondering, for the same reasons as Ravenhill Scout; it targets the damage, not the enemies.

AlasForCeleborn 408
Why are you using rulings from other games to determine the effects of cards in this game? The Lotr FAQ is clear that can't use cards to damage or placing progress on a card that's immune to player card effects. — cfmcdonald 1 8/12/19
You may actually be right. I was focusing more on the 'getting-around-the-targeting-rule', which, again, Tears of Lys and ally Dori support, but the rulebook's flat-out 'can't use player cards to place progress or damage on' immune to player card effects cards may take precedence. Unless, for some reason, moving damage/progress doesn't count as placing it. — AlasForCeleborn 408 8/13/19
You would have been better looking at the ruling that Honour Guard can protect Beorn by targetting the damage, not Beorn. I still don't think your idea works, but that would be more relevant as an argument. — Schrodingers Hat 41 12/21/19