Response: After Haleth quests successfully, search the top 5 cards of your deck for an attachment and add it to your hand. Shuffle your deck. 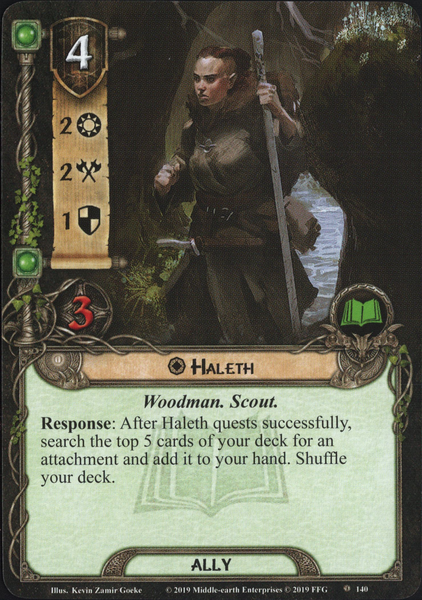 Haleth is my new favorite ally. And this is coming from someone who typically plays Lore about as often as politicians tell the truth. Let's get into why I'm so crazy about her.

Obviously the biggest hiccups are her cost of four, and the uniqueness. First the cost. Four can be a lot, especially in Lore, but is made more palatable by the very nice statline, and also the fact that she is in-sphere with Elf-stone. The uniqueness can actually be a boon because it opens her up as an amazing Messenger of the King target, for a threat raise of eight.

The two is great in Lore, and three means she won't be going down to damage dealing treacheries too soon. She is also in the best sphere for healing. The Woodman trait doesn't do much, other than making her a nice target for Woodman Lore, which came in the same pack. The Scout trait makes her great in a Scouting Party deck, and also a good target for the in-sphere Map of Rhovanion.

Finally, the ability. Maybe part of my excitement is because I do not own, and thus have never played Master of the Forge, but Haleth's ability is amazing. Her ability obviously is great in a Woodman deck, trying to find location attachments, but she can hold her own in any deck with Lore that needs to find attachments. My only downside for her is that sometimes I forget to trigger her ability after questing succesfully!

All in all, a great card in the last pack of the Vengeance of Mordor cycle.