The first event card you play each round that matches attached hero's printed sphere gains secrecy 1.

Each cloak was fastened about the neck with a brooch like a green leaf veined with silver. The Fellowship of the Ring
Jason Ward 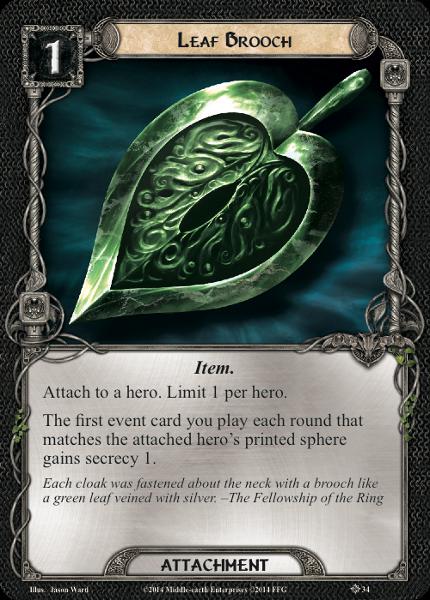 A useful but problematic card. Let's start with the obvious - this card is only ever going to be useful for some Secrecy decks - that's already making it pretty niche, since Secrecy is relatively niche and then this only works for a subset of Secrecy decks. Some Secrecy decks don't intend to actually stay in Secrecy very long - get some cheap allies and a Resourceful or two, then let the threat rise but they've already made a solid start; and obviously Leaf Brooch won't help a deck like that since it'll stop working. Leaf Brooch is only going to really work for Secrecy decks which intend to stay in Secrecy for a decent length of time if not the whole game. And particularly ones which will play a decent number of events.

Even then it may not be a top choice. Since Resourceful exists, a Secrecy deck may well be absolutely fine for resources, especially since some of the cards will be Secrecy cards already and thus benefit from the discount - though it should be pointed out that Secrecy can stack, so if for example you have a Leaf Brooch on a then you can play Out of the Wild for free as your first event of the round. But that brings me to one of the other issues - the first event you play each round that matches the hero's sphere gains Secrecy 1, it's not something you can trigger at will. This card would be notably easier to make use of if it instead said "Action: Exhaust Leaf Brooch. The next event you play this round that matches attached hero's printed sphere gains secrecy 1." But it doesn't, it specifies the first event, which means that if your first event in the relevant sphere is 0-cost then the discount is wasted. Alternatively if you play an event before playing the Brooch then you've missed the chance - say you play Mithrandir's Advice and one of the cards you draw is the Brooch, if you then play it on a hero it won't do anything that round because you've already played your first event for the round. Likewise if you're not in Secrecy when you play your first relevant event of the round - if you have to play The Galadhrim's Greeting to drop your threat back down into Secrecy, then your Leaf Brooch on a hero will be useless since it gave Secrecy 1 to that Greeting which you played while you weren't in Secrecy. These aren't necessarily such big issues, but they do make Leaf Brooch harder to use, and it was niche to start with, as already noted. Also note that it keys off the hero's printed sphere, so extra icons gained through card effects won't increase the flexibility of this card. Finally there's a definite potential issue in that obviously the Brooch stops being useful if you don't have events to play which will benefit from the discount and it's certainly plausible you could run out of targets depending on how your draw works out.

With all that being said, when the Leaf Brooch works it can be very nice. An extra discount of 1 every round if you can line up your events right can be very nice. It's great getting a Secrecy discount on a non-Secrecy event. Now perhaps the most obvious pairing for Leaf Brooch would be the three Secrecy-related events released in the same cycle - Swift and Silent, Noiseless Movement and Courage Awakened - since with a Brooch they'd be free and you can repeat them every round so long as you're in Secrecy. Certainly that resolves the potential issue of just running out of events to get the discount on - though if you use the Brooch as much as twice in the game it gets you a net gain of resources. Outside of those there are still plenty of good options though - being able to play events like Sneak Attack, Feint, A Test of Will or Heed the Dream (just a few examples) for free is pretty great. Or just discounting things like Strength of Arms, Wait no Longer/Gildor's Counsel or various threat reduction events in (obviously important to Secrecy decks) can be very potent. It tends to be more of a bonus than something you build your deck around, but it is a nice bonus to have.

To summarise, Leaf Brooch can be very useful, but there are potentially significant barriers to its use. The most significant of those barriers are firstly keeping yourself in Secrecy, so stock up on threat reduction; and secondly ensuring you consistently have targets for it, so either run event-heavy in general or plan on recurring events with e.g. the Record attachments, Háma, the three Ring-maker events which return to hand if you're in Secrecy, or perhaps one of the most potent options, Elven-light. If you're building a deck which can consistently stay in Secrecy and has either plenty of events or some of the event recursion options I've mentioned here, though, then Leaf Brooch may be a very handy option for you to have available.