Refresh Action: Choose a player. Each hero that player controls that did not spend any resources this round gains 1 resource. Only 1 copy of Tighten Our Belts can be played by the players each round.

There was nothing now to be done but to tighten the belts round their empty stomachs, and hoist their empty sacks and packs... The Hobbit
Matt Stawicki 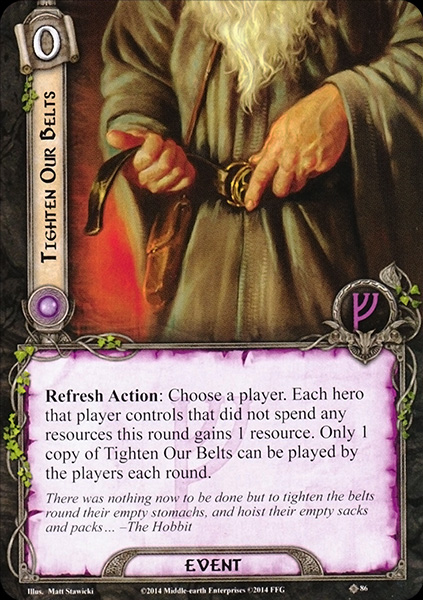 This is a great card. It can be a difficult card sometimes, since it depends on you not spending resources one round to have more the next and the things you can play right now might be really tempting, not to mention sometimes there are cases where you really need to get cards down on the table as fast as possible to deal with what the encounter deck is throwing at you. But when you can get it to work it's so good.

How it works is simple. There's nothing ambiguous about the text - each hero who didn't spend any resources gets another resource. Worth noting is that it can be targeted on any player, so if you have plenty of resources (a common enough situation for a deck), you can spread the wealth to someone else with this. Also worth noting that while in general you obviously want to use this to add 3 resources, it can still be worth it just for 2 if you have to spend one unexpectedly. At 1 it might be a bit of a waste. 3 is what you aim for though, and getting an extra round's worth of resources can be so useful. The only way I can think of to gain more than 3 resources in one go is with Zigil Miner and Hidden Cache, which takes a bit of setup (and arguably that's two resources generating effects rather than one); Legacy of Númenor gives 3 resources (to each player, not just you) but costs in threat; other resource generating effects cap out at 2. But this can give 3 resources completely free under the right circumstances. That's so good.

So the obvious context in which this card really shines is tri-sphere decks. In a tri-sphere deck, given that a lot of good cards tend to cost 2 resources, it's easy enough to find yourself in a situation where you actually can't afford to play anything with the 1 resource per hero you have, so you lose nothing by not spending, and then next round you have 3 resources on each hero and can drop a bunch of great stuff all at once. In a dual-sphere or mono-sphere setup this is still great, but it's much more likely you can actually afford to play something and thus that you are specifically delaying that play this round in order to have more options next round - a totally valid trade-off but not always an easy one to make, and often an unnecessary one. In tri-sphere though, I might even prefer this to Steward of Gondor a lot of the time. This partly comes down to deckbuilding style, but when I build tri-sphere I tend to be fairly evenly distributed among the spheres and keep everything fairly cheap - but even with everything cheap a boost doesn't hurt (especially early game), and in that case I would much rather the boost was spread evenly between my heroes than concentrated on just one of them as would be the case with Steward.

The other way you can kind of cheat extra value out of this card is by noting that its stipulation is about spending resources, not about playing cards. So anything which costs 0, before or after cost reduction, is fair game and will not invalidate your resource gain. Bill the Pony in a deck with Sam Gamgee would be an obvious example, as would a few Secrecy cards. In general this can work quite nicely with cost-reducers - though you need to be aware of the limits of different cost-reducers if you're doing this, since some specify that they only reduce to a minimum of 1. Gríma, Théoden, Damrod and Heir of Valandil all go down to 0, but Master of Lore, O Lórien! and To the Sea, to the Sea! all have that pesky "(to a minimum of 1)", so bear that in mind if you intend to use cost reducers to cheat the system with you belt tightening.

Even without means of cheating it though, this is just an amazing card and one of my favourites from the Ring-maker cycle. Always worth considering in any tri-sphere deck, and can slot into other sphere-combinations as well under the right conditions.

This card has quickly become a staple of my Bond of Friendship decks. You will very often end up not spending a resource from 2-3 of your heroes during each given turn with those kinds of deck so a "0-cost gain 2-3 resources" event is extremely powerful, especially in the crucial early game. This has enabled many powerful 2nd turns for me in the past and I will keep including it in any Bond of Friendship decks I make (especially Hobbit ones for the Saga).