Defender of the West

Attach to a non-objective unique ally in play.

Damage from undefended attacks against you may be assigned to attached ally.

"...if by life or death I can save you, I will."
Aragorn, The Fellowship of the Ring
Romana Kendelic 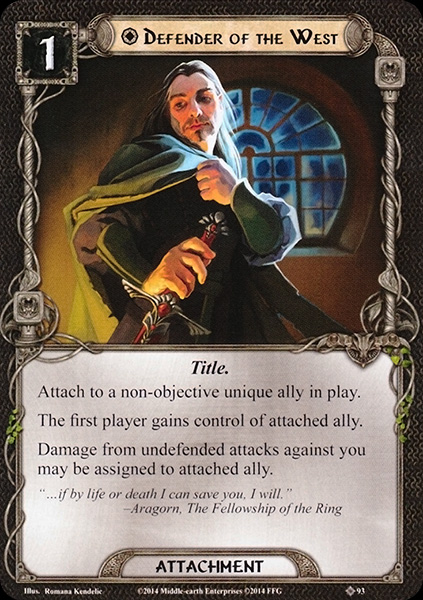 This is one of those cards which looks interesting at first glance, but then is very difficult to actually find a use for. That's obviously not helped by the fact it's clearly more of a co-operative thing and most often decks are built in isolation. Looking at it carefully though, there are two aspects to this card - one, the attached ally is always controlled by the first player, like most objective allies; and two, the ally can take damage from undefended attacks. So we simply need to examine how either or both of those things can be useful, what unique allies would work well with one or both of those effects. Of potential note is that the two abilities do go together reasonably well since the first player is the first to make engagement checks each round and thus is the most likely to end up with more enemies than they can deal with.

Let's examine the two aspects separately though. Firstly, the first player gains control of the ally. Well, as noted, the first player potentially gets more combat than the other players, so if this is a useful combat ally then that could come in handy. On the other hand, it could simply be an ally with some useful ability which only applies to the player who controls the ally, so passing them around the table lets everyone benefit rather than just the one player. I struggle to think of relevant allies though, with one sort of exception - Landroval's ability doesn't only benefit the controlling player, but since limit once per game checks by player, passing Landroval around the table with Defender of the West allows his ability to be triggered multiple times - most likely useful with hero Beorn dying and coming back over and over. Another interesting if somewhat niche possibility could be Firyal if you're being strict about player sequence, so all players except the first can account for Firyal's scry when they decide who to commit to the quest. Next possibility is a negative ability - OHaUH Gandalf is an incredibly powerful ally to have in play, but he raises your threat by 2 every round, so if your fellow players are willing you could use Defender of the West to spread the threat around rather than concentrating it all on you.

Another possibility is if there's something from the encounter deck which targets the first player and this ally can help with that. This can come back to the combat question of course, with boss enemies who repeatedly attack the first player, but there could be other possibilities even if I can't think of them offhand. Say if an effect would discard a card from the first player's hand you could put Defender of the West on Galdor of the Havens so they'd get to draw for it - a minor benefit but it makes the point that these benefits at least could be relevant, and of course Defender of the West only costs 1 neutral resource in the first place. And a final shenanigansy option is that Defender of the West allows you to potentially give control of an ally to someone else if you think or now that you're about to die (at which point normally you would take that ally with you). There are few options for giving control of an ally to another player, and there are some fairly powerful unique allies so this is a not insignificant bit of support you can pull off. Of course the way one can actually plan for this would be to build a shenanigansy deck with Justice Shall Be Done, guaranteeing your elimination at the end of the round, at which point if you're not going to win the quest by the end of the round your best course of action is to give away as much useful stuff as you can, so if that includes a powerful unique ally, all the better.

And now the other aspect, the ability to assign undefended damage to the ally. Well, if you know in advance that you (or whoever is first player at the time) are going to have more attacks than you can deal with, you could simply put Defender onto a cheap unique ally as an alternative to chump-blocking with them. Ioreth for example could use her ability to heal then be killed by an undefended attack, and if you have another copy then you can just play her again the next round. 1 neutral resource isn't an unreasonable cost for that, the only problem being that you have to play the attachment during Planning and may not know whether or not you need it until after the Quest phase. If you're just wanting to ease the combat load of the first player on the other hand, then you obviously want to put Defender onto a unique ally with a decent hit point pool, which rather narrows your choices. Beorn is obviously a great one with his 6 hit points, and Treebeard with 5. No other ally has more than 4 hit points, so those undefended attacks start to become more of a risk unless you have shadow cancellation or damage cancellation ready to ensure the ally survives. Or, of course, hit point boosts. I mentioned Treebeard already, and Ent Draught could be very useful to a Defender of the West to ensure their survival, plus there's synergy for damaging Ents with Booming Ent and Boomed and Trumpeted, not to mention that Beechbone could be another pretty good candidate for taking some undefended damage since it'd power up his ability. But of course Ent Draught can go on any ally, not just an Ent, and boosting any of the 4 HP allies up to 6 would make them a good target, with possibly my favourite candidate being Boromir, since he readies every time he takes damage. So if he defends an attack without taking damage you can take an undefended to get him readied up for the next attack. This approach might require quite a bit of healing, but it'd be very strong.

Returning to the question of knowing in advance that the first player will have more attacks than they can otherwise deal with, enemies that repeatedly attack the first player are perhaps the most obvious case, and they're a difficult one for undefended attacks if you want the ally to live, since generally those are powerful boss enemies, but it's not out of the question. In particular a great case could be Gollum in the two Land of Shadow quests he appears in - he attacks the first player normally in combat and also after engaging during the Refresh phase, at which point you may be reluctant to exhaust a defender and thus prefer to take it undefended. But Gollum's is only 2, so barring one shadow effect (of which there are two copies in the deck) it's pretty safe to take that undefended, but all the same you may still prefer to preserve the hit points of your heroes, so Defender of the West becomes potentially a very useful option.

All in all, yeah, Defender of the West is a tricky cards to use, but there are a few decent ways. Maybe the odd bit of basic undefended shenanigans, or Justice Shall Be Done shenanigans, but more likely build something around putting it on an ally like Landroval, Hobbit Gandalf, Beorn, Treebeard, Beechbone or Boromir, and I think the possibilities there are at least interesting enough to be worth a try from time to time.