Booming Ent gets +1 for each damaged Ent character you control.

"...a man that hacks once at an Ent never gets a chance of a second blow." Merry, The Two Towers
Jarreau Wimberly 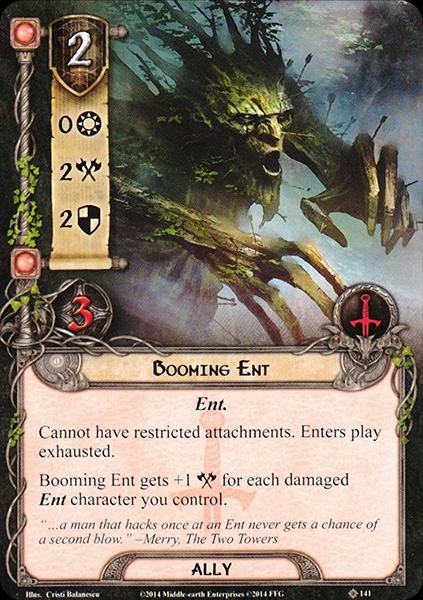 This card is a funny one. By itself and without other Ents, Booming Ent is slightly above average with a slight knock against it's exhausted clause when it enters play. Even so, it has a decent amount of defense and hitpoints to soak up early damage and direct damage from the encounter deck. Once you add a few more Ents, specifically cards like Derndingle Warrior or Quickbeam then it starts to get out of hand. In a truly dedicated Ent deck, like the one from Warden of Arnor (posted below) then the Booming Ent gets out of control. Running a very similar list I have been able to turn these guys sideways during attack and not even concern myself with math. With two Derndingle Warrior's and two Booming Ent's (both damaged) you can swing either of these guys at an enemy for 6 damage or together for 12!

When playing with a deck that is almost entirely Ent allies and a scenario with lots of archery damage, how is this card not broken? I tried an Ent deck like this (Ents along the Anduin) a couple of nights ago and ended up with two copies of this guy on the table with +10 attack strength apiece. There wasn't any enemy that I could not defeat. Hill trolls were falling like flies.

This was a very well designed card for setting up the whole idea behind the Ent deck archetype - that it's all about damage. All Ent characters have good hit point pools which by itself makes them good targets for Archery or other direct damage effects, but this was our immediate indication that damage was a general theme and it just works so well. Even back when this guy was released, you could get 3x Booming Ent, 3x Wandering Ent and Treebeard to potentially boost your Booming Ents up to 9 if you got some damage onto all those allies - thoroughly capturing the feeling of having powerful Ents under your command who can tear down buildings with their bare hands.

That was then. It clearly showed us the idea which was going to be developed further in its simplest form, which was already good. Now, though, with the Ent trait much more fleshed out, the Booming Ent can become a monstrously powerful centrepiece to the whole deck, as so many other effects trigger based on damage and thus increase the Booming Ent's power level. If you use hero Treebeard he can damage himself at will, Quickbeam can take a damage immediately on entering play, Beechbone can damage himself when attacking, Derndingle Warriors can damage themselves while defending quite apart from just taking damage from the attacks potentially. Boomed and Trumpeted doesn't help get more damage but it ties into the same synergy, and of course Ent Draught gives more hit points so it's easier to take more damage. It all ties together into that same synergy which was started by the straightforward but incredibly potent ability of the Booming Ent, who now has a theoretical maximum of 18. Chances of reaching that aren't great but that's also more than you're likely to ever need, especially three times over and plus the of all the other Ents as well. In the meantime even if you never get close to the maximum you're likely to be incredibly consistent at getting a fairly significant amount of attack.

With the proviso that you have to treat them kind of like Gimli and either take some defences early on to power up their for the future or use them against quests with direct damage to that end, the Booming Ent can be a very valuable combat ally in and of himself, with the potential to just get totally crazy in a deck with plenty of Ents.

Warden of Arnor 5140
Does Booming Ent count himself when damaged, as a &quot;damaged Ent character&quot;? — lecudas 1 3/27/20
@lecudas Yes. If you have other similar questions about the game, a good place to ask is on the Discord channel: https://discordapp.com/invite/hApBUFT — Seosaidh 402 3/27/20