Response: After Mirkwood Explorer quests successfully, place 1 progress on it.

Action: Exhaust Mirkwood Explorer to move all progress from it to a location in play. 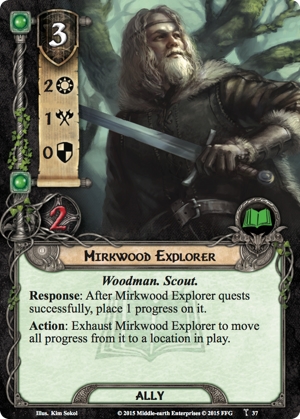 Mirkwood Explorer is a bit of an odd card. Like another location control card from the Dream-chaser cycle, Explorer's Almanac, he provides location control that is primarily effective when you're able to quest successfully, i.e.; not experiencing location lock, the time when location control is most useful. Mirkwood Explorer is thus of little use as a come-from-behind card as you need to come out ahead of the encounter deck in order to make use of him, but at 3 cost for 2 he isn't the most efficient come-out-ahead card either. The best way to think about him is as a maintain-your-position card, where he helps maintain your position by questing for 2 in good times and potentially removing troublesome locations in bad times.

But his location control runs into another problem fairly quickly, namely how honestly clunky it is. You need to quest successfully with him to build up progress, which means you'll want to either exhaust him or run some readying effect like Valiant Determination so that he's ready after questing. You'll want him ready because, in order to use the progress you build up on him to explore locations, you need to exhaust him, meaning that while you might explore a 2 location you also lose Mirkwood Explorer's 2 for the turn, making the net effect of Mirkwood Explorer's location control 0 for the turn. In addition, the widest range of targets for his location control that you'll have is after the staging step, making keeping him ready until then critical if you want to use him for location control. But the most effective and reliable way of keeping him ready is to hold him back from the quest, meaning that you don't make use of his 2 , and, more importantly, you're not questing successfully with him so he doesn't build up progress. This means that Mirkwood Explorer effectively has two gears, which can take some time to shift between; questing mode to take advantage of his 2 and build up progress and exploration mode where you use that progress to explore locations. Without readying, it takes at least one, possibly multiple, turns to use both gears effectively, a tempo hit that may kill you if your tempo is already disrupted by an unlucky encounter card reveal. The worst part is that Mirkwood Explorer came out in the cycle of the box that provided us with quite possibly the best location control in the game that doesn't require you to run a specific hero to use, The Evening Star. Unlike Mirkwood Explorer, The Evening Star is quick, simple, and flexible, giving you point-and-click location removal. Granted, Mirkwood Explorer is repeatable location control, but that implies that you put in the effort required to get him off even once.

AlasForCeleborn 525
The existing review notes why this card is weak, but if you're going to run it, consider also running Warden of Arnor. It's a solid card, but it can only go on a scout. Because you'll almost always be questing with this character, it's a solid fit. — mroctober 88 3/10/21
Unfortunately, Warden of Arnor can only be attached to heroes. — Nystrum 29 10/6/21