Attach to an ally. Attached ally does not exhaust to quest.

The Ghost of Framsburg #92. Spirit. 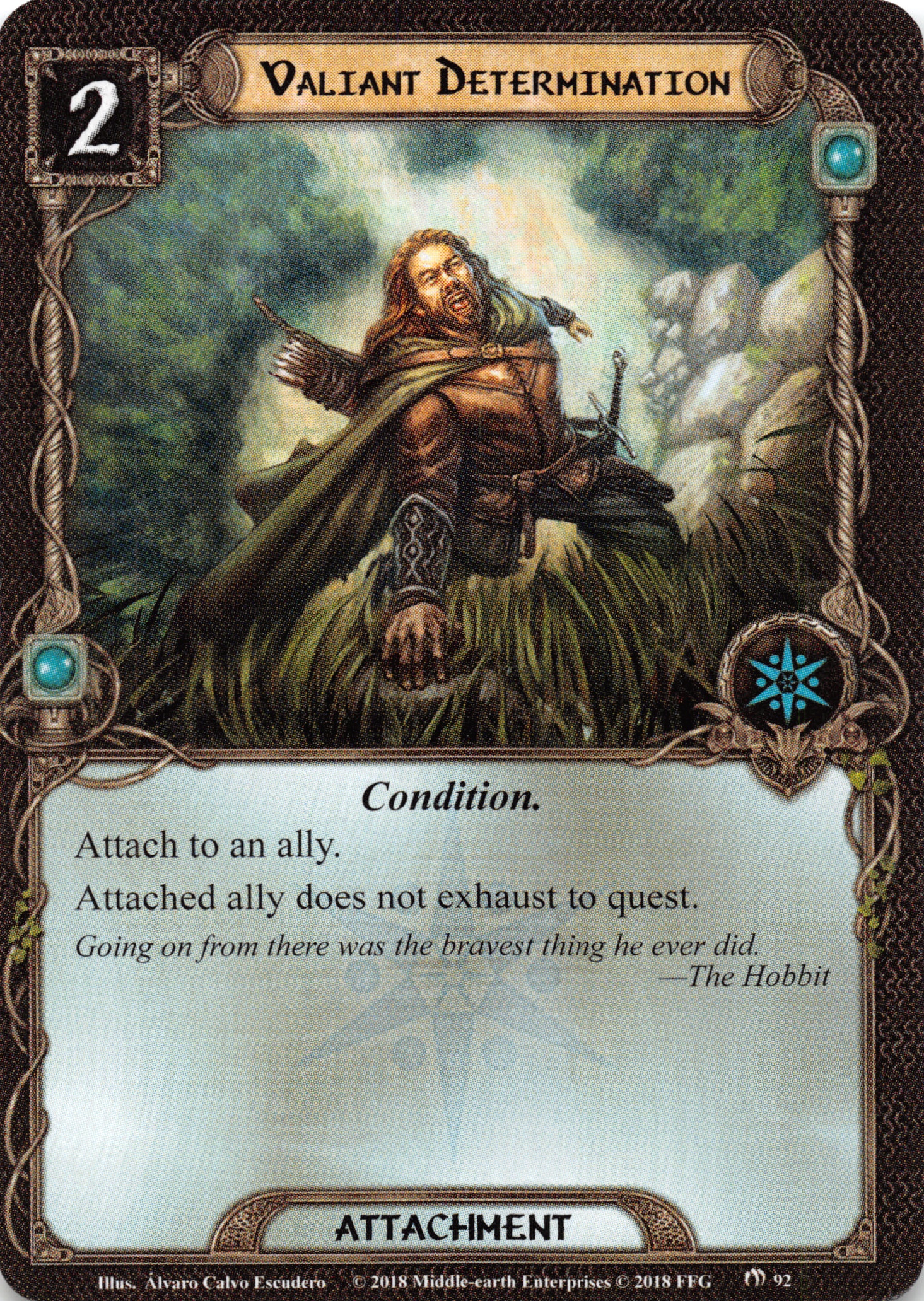 This is effectively an Unexpected Courage but for allies which can be enormously helpful. Fits well into an outlands decks with access to spirit, allow Ethir Swordsman to both quest and attack once boosted. Another good target is Faramir allowing him to both quest and boost global willpower.

To take full advantage of this card, you want allies with strong and also either (a) a strong conditional ability requiring that ally to exhaust or (b) a strong or value. So let's review the most likely targets. In sphere, we fortunately have some decent options:

-Glorfindel has 3 plus 3 , though he's already got built-in readying so this card is less critical.

-Descendant of Girion is well-rounded with 2 in all stats, and with an Armor of Erebor could contribute 2 and also boast a reasonable 3 .

-Northern Tracker has an amazing questing ability, but it's strongest stats are in and so Valiant Determination is a good fit.

-Elrohir is another decent target, with 2 and 3 so long as Elladan (or other Elladan) is in play. Doubling up on the ally versions of the brothers would allow Valiant Determination on both, since it's not unique.

Those four are about it for , but still some decent options for a sphere with native access to Wild Stallion -- an excellent complement to Valiant Determination. I would also be remiss in this review if I did not also mention the synergy of this card with ally-focused Caldara/Narya decks, in which you're very likely to see at least 2 of these 4 in play by turn 2 or 3, so your Valiant Determination will hardly ever go to waste.

Off-sphere provides even more ally targets, though it starts getting harder to manage the 2 resource cost.

Interestingly, probably has the best targets for Valiant Determination of any sphere, with solid stand-alone staples like Firyal, Gildor Inglorion, and Quickbeam. But also offers more niche opportunities with allies like Morwen Steelsheen (for Gondor or Rohan decks), Haldir of Lórien (a good pinch-hitter with his ranged attack or sentinel defender in combo with Cloak of Lórien), and even Mirkwood Explorer which can turn into a mini Northern Tracker.

Surprisingly, is probably the second-best sphere for Valiant Determination targets. While there are no native 3 allies, there are a plethora of staple 2 allies with great secondary stats (Eagles of the Misty Mountains, Gwaihir, Yazan) or a useful ability (Beechbone, Bofur). That said, these allies are expensive and generally more niche, so the likelihood that you'd be running these in a deck that happens to have access to 2 resources is slim.

In , options are pretty much limited to Faramir (as mentioned above), Rosie Cotton, and Knight of the White Tower -- you're not going to build a deck around these, but if you've got access to and plan on running these allies anyway, it's a good 1x.

Last, Treebeard is a very popular and powerful ally who can make very good use of a free quest action.

So, taken altogether, Valiant Determination is an auto-include for Caldara decks and a likely choice for Spirit-heavy Noldor or Dale decks due to ease of paying for this attachment and the high likelihood that a useful ally will be in play. I would certainly consider it for a Harad deck, as it works nicely with both Yazan and Firyal if you have a way to pay for it. I could see this card also having a niche use with Morwen Steelsheen in some Gondor/Rohan decks and also with Rosie Cotton in Hobbit decks, especially if there's no (for Fast Hitch). Outside of these cases, however, I doubt that Valiant Determination will see much play.

kjeld 270
Treebeard is probably the best candidate. The other stats with even more readying is attractive. — Raiderjakk 44 1/3/22
After writing this review, I think it's less a question of which specific ally works well with Valiant Determination and more a question of which types of Spirit decks run groups of allies that would be decent targets, such that Valiant Determination will never just sit as a dead card in your hand just waiting for the right ally to come out. Given that Treebeard can be splashed into almost any deck, he is certainly a good addition to help flesh out the pool of good targets for Valiant Determination if you're running it in your deck. — kjeld 270 1/3/22