Response: After Merry enters play, each unique ally you control gets +1 until the end of the round.

"Shire-folk have been so comfortable so long they don"t know what to do. They just want a match, though, and they"ll go up in fire."
-The Return of the King
Torbjörn Källström

A Shadow in the East #3. Leadership. 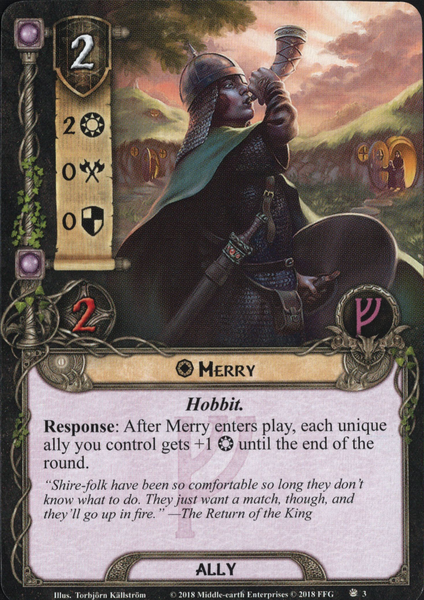 At first glance Merry doesn't seem super exciting, especially compared to the ally version of his buddy released in the same box, with a one-dimensional statline and a semi-situational, one-time use ability. However a closer look reveals that there's more than meets the eye with this Hobbit. First off, despite Leadership being arguably the second best questing sphere and the sphere that is home to most of the global willpower boosting cards, like Sword that was Broken, Visionary Leadership, and Merry himself, a 2 cost 2 ally in Leadership is quite rare. In fact Merry is just one of three, the others being Rosie Cotton and Angbor the Fearless (you could throw Dwarven Sellsword in the mix as well, but if you want to keep him around it'll end up costing you more than 2). That alone makes him valuable.

Then on to his ability. In terms of willpower boosting allies, Faramir is obviously superior, as his boosting is not restricted, is repeatable, and can be saved to use between staging and quest resolution. However he is also double the cost, and with an ability that requires him to exhaust, his other stats are often not really able to be put to use. Merry's Response being restricted to unique allies is somewhat unfortunate, but unless you're playing some sort of swarm deck like Outlands or Dale, chances are that you at least have a couple of unique allies in play to get good use out of it (also note that Merry himself will also receive the boost). Obviously Merry fits in perfectly with the new Fellowship contract, and I can only assume that he was specifically designed with that in mind. He also makes a nice combo with Sneak Attack (which is conveniently in sphere), but that's not really surprising as just about anything with a half decent enters play effect combos well with that card. Finally, and this is mostly a minor point although it can be useful in some situations, Merry's ability lasts the entire round, so for example you could combo him with Rosie Cotton to give another character +3 to a stat instead of +2.

Merry's only downside is that he invalidates his hero version, which I personally find pretty essential for Hobbit decks as one of its main reliable forms of combat, although ally Pippin can serve as a replacement for hero Merry. Ultimately, this isn't really an issue for me as I don't see ally Merry as a card meant for dedicated Hobbit decks anyway. All in all Merry is actually quite good and really shines in any deck that has at least a decent amount of unique allies.