Ever My Heart Rises

Response: After you travel to a Mountain or Underground location, ready attached character and reduce your threat by 1.

'This is more to my liking,' said the dwarf, stomping on the stones. 'Ever my heart rises as we draw near the mountains.'
The Two Towers
Carolina Eade 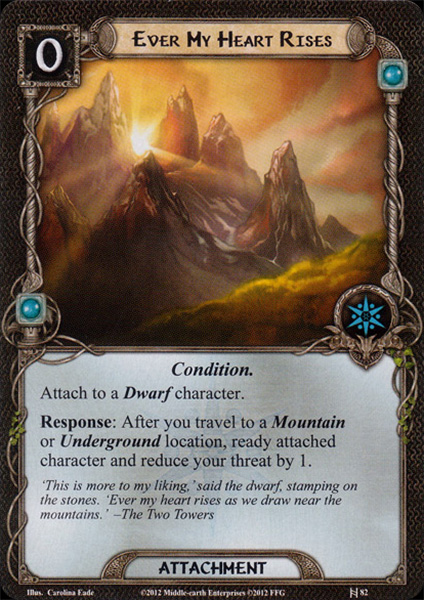 Ever My Heart Rises is a really weird card from a balance perspective. For the most part it's either totally useless or seriously overpowered depending on what quest you're playing. The relevant traits may in some cases appear on maybe one location in a quest that's not specifically in the mountains or underground, but those are very rare, so by and large it's just an all-or-nothing choice.

So in most quests EMHR is, as I said, completely useless. Unless you know you're going to have to dicard an attachment to some effect and want something completely free and disposable, and there are other things that could fill those criteria. Of all the cards we have which depend on encounter card traits, this is the worst in that respect because in the absence of the relevant trait(s) it does absolutely nothing and thus becomes nothing more than a waste of a card slot in your deck. If you're playing a middle ground quest where some locations match the trait but not all, it tends to be just one location and so I'd say it's still not worth it. I'm not sure what the threshold might be at which it'd become worth it, but it's not something we've ever had cause to explore.

On the other hand in those quests which are specifically mountains or underground this card becomes crazy good. The repeatable threat reduction means that any round where you travel to a new active location you negate the natural threat raise at the end of the round or get a net reduction if you have multiple copies of this. In a multiplayer game travelling to a location is often something which happens every single round, at which point your threat only goes up over the course of the game from Doomed, and you can very easily end the game at a noticeably lower threat level than you started it. We've seen how powerful an effect that can be with Galadriel and Beregond, but this doesn't take up a hero slot like those two! You also get to ready the character every time, which is comparable to an Unexpected Courage, but this costs 0 as opposed to the 2 for UC, with the only relative downside being the specific timing, but such a common reason to desire readying is to use a character for questing and then have them ready for combat as well, so there should be no shortage of good candidates, especially with the potential addition of the boost from Dain Ironfoot. And this doesn't even have to restrict your hero selection - while you might well want to use this card with heroes like Thorin Oakenshield or Gimli, you don't have to, because it attaches to any Dwarf character, not just heroes. So you can potentially make good use of this card attaching it instead to allies like Bofur or Zigil Miner.

If you're building a generic deck intended to take on a variety of quests, this card should never make it any further than your sideboard. But if you're using any Dwarves and you're building or sideboarding specifically for a quest set either underground or in the mountains (for example, half the Dwarrowdelf cycle, To Catch an Orc, The Dread Realm, Ruins of Belegost) you should give this card some very serious consideration because in those contexts it is ridiculously good.

I wanted to add that this card is such a thematic home-run. From the artwork, quote and ability, it all speaks to the invigoration of the Dwarven spirit () by traveling to ancestral territory. Naturally, it's quest dependent and not an auto-include, but to me that makes it even more thematic! To avoid being too corny (per the card's title), all I'll say is I too feel a little sense of exhilaration when I'm able to include it in a deck (more theme win).