Action: Each player chooses 1 enemy engaged with him. Until the end of the phase, each chosen enemy cannot attack the player that chose it.

...it was a delight to hear the voice speaking, all that it said seemed wise and reasonable... The Two Towers
Andrew Johanson

The Voice of Isengard #13. Tactics. 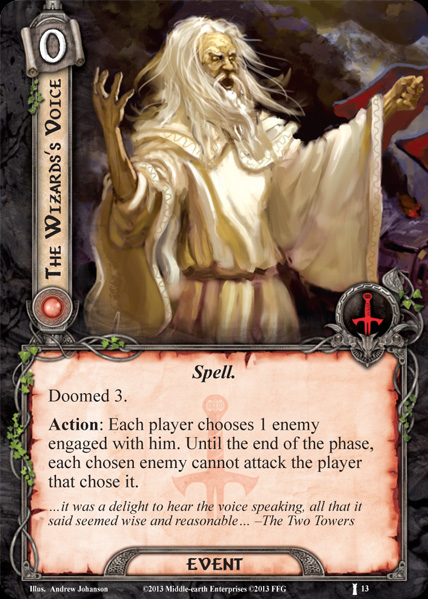 The Wizard's Voice is to my mind the most problematic of the Doomed player cards. The simple and obvious issue with putting Doomed on player cards is that Doomed is a penalty to all players in the game, not just the one who plays the card. The Doomed events in the Voice of Isengard deluxe tried to bypass this issue by having each event offer a bonus to all players in the game, thus equaling out the exchange of threat for benefit... at least in theory. Deep Knowledge and Legacy of Númenor got it pretty well, but Power of Orthanc and The Wizard's Voice both suffer from the same problem in this regard - they offer an opportunity for all players to do something useful in exchange for the Doomed cost, but it's a useful thing which may not be possible for all players to do at the point when the card is played.

Before I go any further I just want to make a small sidenote: what the hell is up with art of this card? 'The Wizard's Voice' refers to Saruman's ability to influence, charm and beguile people by talking to them, convincing them that he must be right because he's so wise etc, but the art looks far too aggressive to be anywhere near that idea. If that art fits Saruman at any point in the books, it would be perhaps his brief flashes of rage towards Theoden and Gandalf on them defying him and showing that his beguiling voice is no longer working on them - making it rather odd for a card about that ability of his working entirely as intended.

Anyway, as I was saying, the big problem is a potential lack of targets. Deep Knowledge can only whiff if a player has emptied their deck, while Legacy of Numenor will always provide more resources though how useful they are may depend on circumstances. They're pretty close to universally helpful though. The Wizard's Voice on the other hand lets every player prevent an attack from an enemy. But this can fail to provide its full effect in any circumstance when the number of enemies in play is less than the number of players, meaning that the majority of the time you'll be getting less than full use out of this card. But it gets even worse than that - each player can only prevent the attack of an enemy engaged with them. So any circumstance where the enemies are more concentrated rather than being spread between the multiple players - because some decks are more combat focused than others, because someone's playing Dunedain and wants all the enemies, because someone's playing Haldir and wants everyone else to take the enemies, perhaps because of annoying Forced effects on some of the enemies leaving you no choice in how they engage, or any other possibilities - you once again can't get full use out of the card, so someone will be taking a threat-raise without getting a benefit from it. Now I suppose if you're using this card you could plan for it and have everyone take an enemy deliberately to get the use of this card to stop all those attacks, but if this means someone taking on an enemy they can't really deal with, then you better have some Ranged attackers ready to kill that enemy otherwise you'll have a serious problem in subsequent rounds. This card is incredibly useful in those situations where things spiral out of control and you have more enemies on the table than you can sensibly deal with and everyone has to take something whether they want to or not, but is that something you really want to plan for or would you rather plan to avoid things spiralling out of control in that way? Sure, sure, the best laid plans of mice and elves gang aft agley, but at best that confines this card to certain specific quests and higher player counts and at worst it leaves it as a consistent dead draw the vast majority of the time.

The other point I might question is the Doomed cost - is 3 a bit high? Certainly the Doomed 2 on Deep Knowledge or Power of Orthanc tends to be easier to stomach than higher amounts, though that may be more of a knee-jerk reaction rather than anything else. But in an analytical sense, is 3 threat worth cancelling an attack? Well, of course that may depend on the attack and the availability of other solutions to it, but in general we can very simply compare to Feint. The Wizard's Voice admittedly has the potentially sizeable advantage in multiplayer that only one player needs to play a card rather than all players, but Feint makes the precedent that cancelling an attack is worth 1 resource; meanwhile Legacy of Numenor gives 3 resources (usually) for 4 threat and so we have a rough exchange rate of 1.33 threat to 1 resource. By this exchange rate, The Wizard's Voice definitely doesn't seem suitably costed as it gives the effect of a 1-cost resource for 3 threat, which going by LoN would be worth 2.25 resources. One might perhaps make the argument that Feint is undercosted for the power of the effect it gives, and perhaps you'd have a reasonable point, but given that it exists The Wizard's Voice shouldn't have been costed so divergently to it. If Feint cost 2 then 3 threat would be much more in line, but it doesn't. Given that Feint costs 1 I feel like The Wizard's Voice would be substantially more palatable to players if it was Doomed 2 (equivalent to 1.5 resources by LoN rates) rather than 3.

There are definitely some reasonable uses of this card. It becomes much more worthwhile as player count rises as additional value is gained through the aforementioned fact that only one player needed to play a card for all players to reap the benefit. It should be noted that it's a regular action rather than a combat action, so if something triggers engaged enemies to attack out of phase then this will help where Feint wouldn't. And in particular it's obviously very well suited to quests in which certain effects will put enemies into play engaged with each player, or even more significantly, when a boss enemy (that's not immune to player card effects) is considered to be engaged with each player, such as Durin's Bane in Shadow and Flame, where a single play of this event will prevent the attacks to all players in the game. But as I said above, at best it's a niche card for higher player counts and particular quests. Most of the time there are just so many other things you'd rather have and you're liable to feel the cost in threat is too steep for the benefit. The big places where Doomed cards show their quality are in accelerating your early-game, when resources are scarce but you have plenty of threat to spare, or by providing effects which aren't easily available from other cards; but this card offers a too-restrictive version of a benefit which mostly shouldn't be needed in the early-game and can be easily replicated by other events.