...others had gone west, and with the help of Aragorn and the Rangers had searched the lands far down the Greyflood... The Fellowship of the Ring
Arden Beckwith 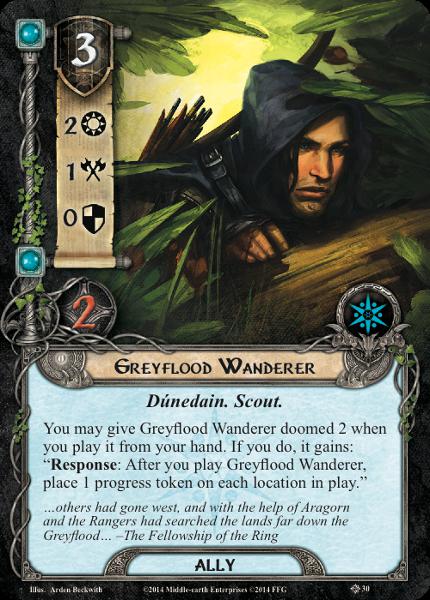 The Greyflood Wanderer is not inherently a bad design, but suffers from the existence of other cards which do his job better than he does. As I've noted elsewhere, the primary utility of Doomed player cards is in either granting an early-game boost when resources are scarce but threat is plentiful - obviously the Greyflood Wanderer can't really fit this category since he costs 3 resources; or in granting an ability which can't be easily acquired through other means. On the second criterion Greyflood looks a bit better, as placing a progress token on all locations in play is a very powerful ability, and certainly not a common one. If the Greyflood Wanderer were even just in a different sphere he might be OK, but his downfall is that for one more resource in the same sphere you can play a Northern Tracker instead. The difference between each location in play and each location in the staging area is only the active location - which already can be explored via questing so it's not such a big concern as those in staging, and of course the Northern Tracker's ability triggers every time he commits to the quest rather than just once when you play him, and doesn't cost you any threat. Now one could certainly argue convincingly that the Northern Tracker is a bit too powerful, and if he were designed now rather than back in the Core Set days his ability would be less potent. But since the Tracker does exist, he cannot be disregarded, and the Greyflood Wanderer simply doesn't stand up to the comparison.

If you do want to use the Greyflood Wanderer, it would likely be in a context where you want as much location control as possible and so have Norther Trackers already. Given that Rhovanion Outriders also exist now, along with many other location control cards I don't feel like there's a spot for the Wanderer even then. I briefly thought I saw a glimmer of hope for him when I realised he's a Dunedain and can thus be cheapened by Heir of Valandil, but then I remembered the Northern Tracker is a Dunedain as well. The only hope for Greyflood may lie in his Scout trait which allows him to trigger Distant Stars, Expert Trackers or Guarded Ceaselessly; or to be part of a Scouting Party. Perhaps if Scout synergy continues to be developed we'll find a place for this ally after all, but then if the synergy continues to be developed we'll probably also get other Scout allies released to replace him with, so alas he may have to remain in the binder.

Perhaps the one exception would be against Temple of the Deceived, the third quest of the Dream-chaser cycle. Since all the locations are in play all the time, forming the map, but most of them will not be considered to be in the staging area, this is a case where (unless I've forgotten a rules point) the Greyflood Wanderer would actually do a lot more than Northern Tracker. But outside of that he's pretty hard to justify including. If Northern Tracker didn't exist he'd be good, or if he was in a sphere other than and thus not in such direct competition he might stand a chance, but neither of those things are the case and since the Tracker was a Core Set card he can't even win out in a limited card pool context. Alas, this one's kind of a dud.

Warden of Arnor 4563
Great post, I am of the same opinion. Just a thought, but I think they should have removed the doomed 2, it's too harsh especially in multiplayer just for this 1 time effect. His effect not as strong as Deep Knowledge where it boosts the whole table. The Greyflood wanderer is like a mix between the Northern Tracker and the Lorien guide, the former having the Dunedain trait and the latter the scout trait. But both of them trigger when committing to the quest and not once, and they only have 1 WP vs the Greyflood Wanderers 2 WP. To me his 3 cost + 1 time on play effect + 2 WP seems balanced enough considering the other options. — Grishnákh 63 3/23/21