Wherever he came men's hearts would lift again, and the winged shadows pass from memory.
The Return of the King
Dmitry Prosvirnin 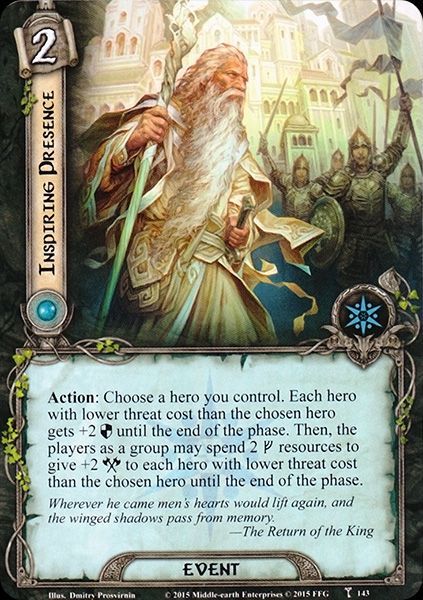 I know it's a very unpopular card, but it has been a very useful card in my experience in the right situation.

In multiplayer, it can be incredible, espesially in 3-4 player games. Apply it to a high threat hero like Gandalf, Elrond, or Treebeard, and nearly every hero in the game gets a 2 boost. If the players have any leftover resources left, then they can give all of those heroes a 2 boost.

Now, for the problems.

There are a small amount of heroes that this card can reliably be used on. The heroes in most decks usually range from 9-12 threat cost so you have to apply this to a 13+ threat cost to get reliable use out of it. If you use it on a 11 or 12 threat hero then chances are you will miss a few target heroes who may actually need the boost.

The fact that it is a card is really annoying because you probably want to use this card on one of the three high threat cost heroes mentioned above. Elrond and Treebeard are both cards so you have to find some way to pay for a card. You could include a hero or A Good Harvest etc and for Elrond you could use Vilya to solve the problem. Inspiring Presence works ok with Gandalf on his own but you can get it in more reliably using Wizard Pipe. The card would function much better if it was in the sphere. While in theory you could go out of your way to fit this card in with those heroes, it's not worth your time usually.

Most of the time in combat, is more important than because you need to get rid of the enemy so it doesn't attack you again next round, while for defending you could just chump it or defend with one of your more beefy heroes. So, if the base effect of the card was the extra and the secondary effect the boost, then this card would probably be used more often.

A very niche card, but one that I have found great use with in a multiplayer deck.

FolcoBoffin 165
One issue I can have with this card is that you need to have most of your heroes ready to be worthwhile. As a late game combo action with Grim Resolve or Doom Hang Still, especially in combat-heavy quests, it can save the day, but you'll have to spend 2 spirit resources and 7 leadership resources. There simply are better stat boosters in the game. — banania 475 5/5/19
Good point. I forgot to mention that. — FolcoBoffin 165 5/6/19