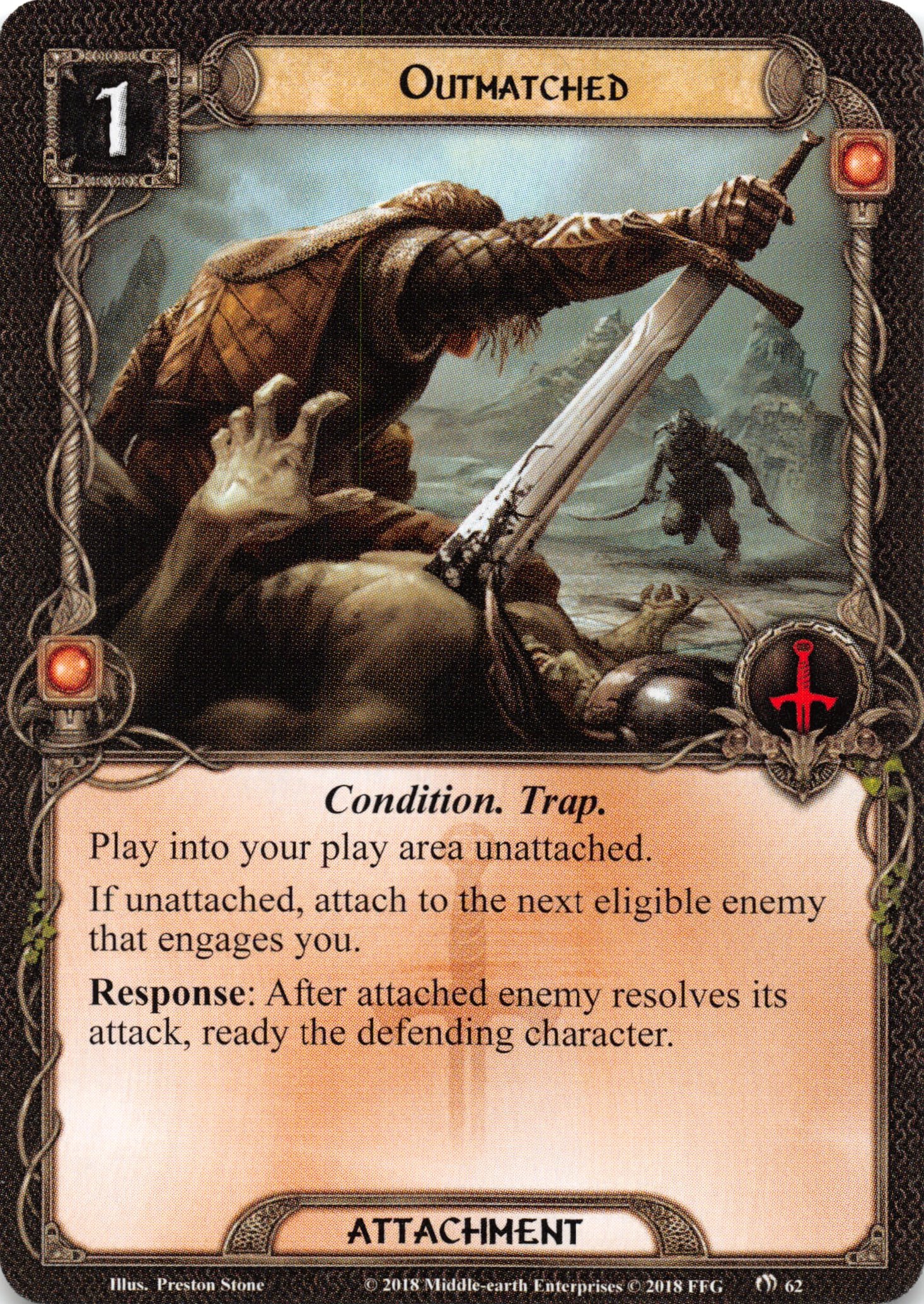 Jtothemac 434
I don't know, to me it feels like it was specifically designed for Dunedain, in which case it is a pretty good card. But yeah, outside of — Swordthatwasbroke 611 4/14/20
Outide of that its use is limited — Swordthatwasbroke 611 4/14/20
This is indeed a card created with a specific archetype (Dunedain decks) in mind. It gives one (almost) free defense against an enemy which you can then keep engaged to fuel the archetype effects. And since there is always the possibility of the optional engagement the contro over which enemy gets the trap is higher than usual. Niche but quite effective for its purpose. — Alonewolf87 1586 4/14/20
Also makes the usually-dreaded &quot;Attacking enemy makes an additional attack after this one&quot; relatively tame. — NathanH 7 4/19/20
Tom Cotton loves this card. — GrandSpleen 1311 4/20/20
2

I believe that this card is sorely underappreciated. I would even say that I prefer it over Feint. Feint provides a single defense for one resource. While this is a great trade, a well-rounded deck must have another way of defending enemies. 3 Feint will not support a player's defense for an entire game. Thus, most decks choose to run a defender. In any deck which uses a good defender, such as Beregond or Dáin Ironfoot,Outmatched is far superior, as it can provide unlimited defenses. This allows you to ignore the attached enemy, saving the need for attackers. Let's say you are playing solo and are engaged with an enemy. Thus, you do not commit your defender to the quest. Typically, you would have to leave another character ready to defend, in case another enemy is revealed that turn. Because you have bought Outmatched, you don't need an additional defender. However, the same is true of Feint. Where Outmatched really shines is in the early game, before you have enough to kill enemies. You can safely leave both enemies engaged with you while only needing one defender. Admittedly, in contrast to Feint, you still have to deal with shadow effects. However, Feint only works for a single turn. Outmatched allow you to ignore the need to attack enemies is far superior. Both cards have their place. Feint can handle enemies who cannot have attachments. Simply put, Outmatched is a far more fun card, which can outperform a Core set staple. Not to mention the fact that it fits in with Damrod and the Dunedain. Overall, this card breathes new life into defense. Give it a try!

NERD 217
Inspired me to make a deck built around this card: https://ringsdb.com/decklist/view/31192/trapsandmaps-1.0 — kjeld 310 9/1/22
# — hawkeye007 19 9/2/22
I definitely appreciate the new perspective on this card. You pointed out some math around it that I definitely didn't consider in the past. However, I think it is still tricky to use because certain enemies have forced effects or certain scenarios have bad enough shadow effects that I wouldn't feel super comfortable treating this as effectively a 1-cost Forest Snare as you suggest. — frozen 92 9/4/22
While that is true, if you are using Beregond as I suggest each of his versions have shadow cancelation in their sphere: Hasty stroke and Sterner than steel. — NERD 217 9/19/22