Ho! Ho! Ho! to the bottle I go
To heal my heart and drown my woe.
—The Fellowship of the Ring
Romana Kendelic 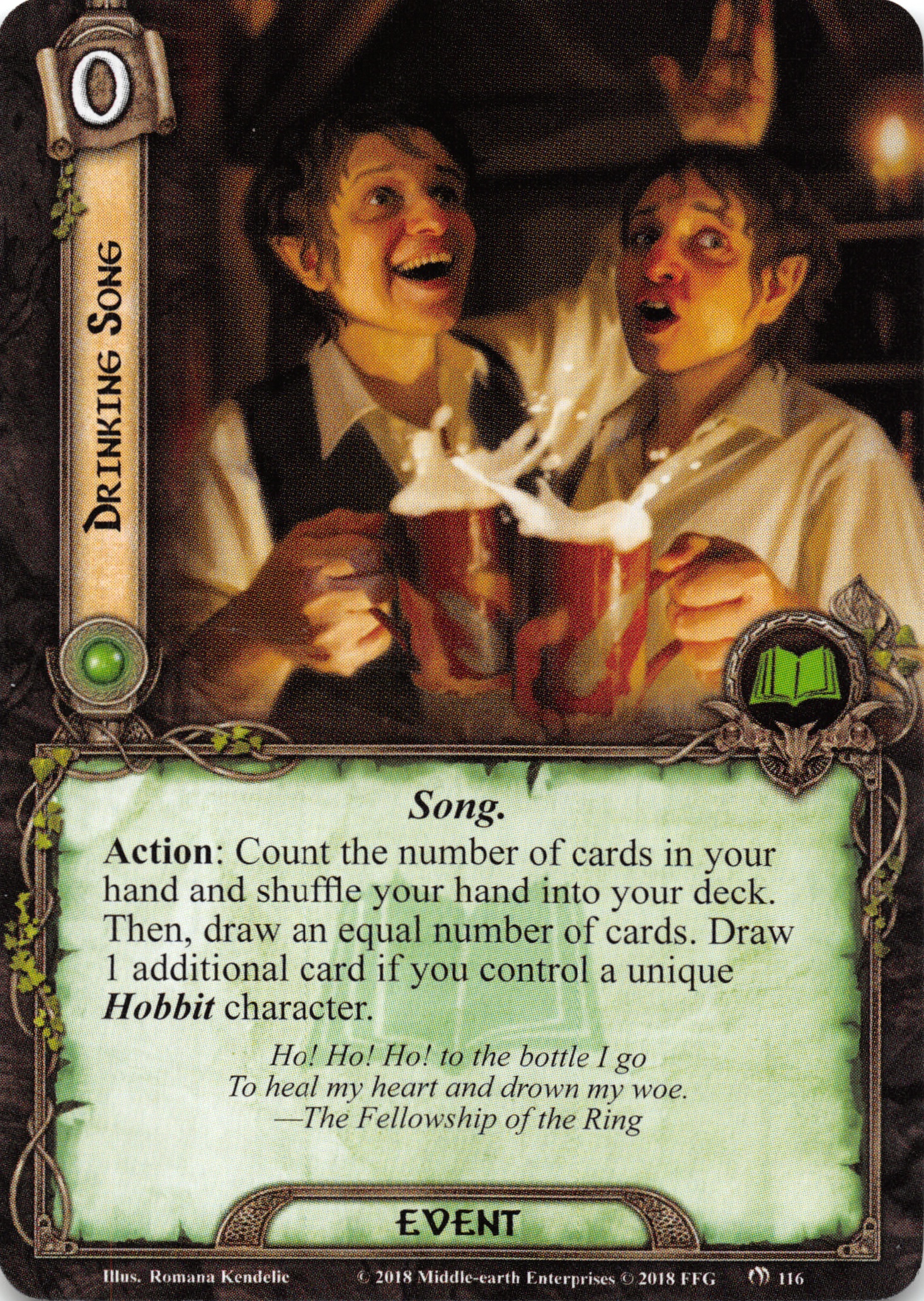 I must say, I really like this card. Enough that if I have a unique Hobbit and , it'll probably be an auto-include.

Basically, if you control a unique Hobbit, it serves as a mid-game mulligan, as the 1 extra card draw replaces the card itself. So with 3 of these in your deck, it essentially tightens it to a 47 card deck... assuming you're OK doing mid-game mulligans. The drawback is you may already have the cards you want, but simply can't pay for them yet, in which case, Drinking Song is taking up space until you can play it later. So where might it fit well? In decks with several duplicates that may clog your hand, and/or decks with various key cards you want to fish for, and you've no Daeron's Runes at the moment.

Without a unique Hobbit, it's harder to justify (but not impossible) as it no longer replaces itself. Still, in decks with large card draws, it'd be handy for those times when you're holding 10+ cards, but you still can't draw the 1 key card that's been eluding you, so it's time to "roll the dice" and see if it pops up.

I love the idea and artwork, which hints at Hobbits being lax in their vigilance, with the result being you won't quite know what'll happen. Will your replacement hand end up worse? Or turn out better, such as when Pippin gazed into the Palantir?

One of the few cards in the game that I'd truly call a "fun" card, for its name, artwork, and an ability that provides a mid-game mulligan.

Great design. It's really not hard to fit unique Hobbits in a deck. With Hobbits this card goes from good to great. There is a deck thinning aspect to any card that replaces itself, and more than once have I found myself wishing for one or two more Mulligans.

I initially underestimated this card, after playing with it more, I think it's very strong for certain decks. It's less consistent than say Word of Command, but it's a lot more splashable. It's amazing for decks that want to use secrecy it doomed cards early. It really shines in a Hobbit secrecy deck, which frankly needs it for the consistency.

It's nice to have some competition or alternatives to peace and thought and daeron's runes. Fine addition to the card pool.

MinkeWhale 63
Well, this card has hobbit references. Illustration and a bonus if you have a hobbit hero. But seriously, I think it shines even more in an Erestor (Lore) deck. 10 starting cards and still no Steward of Gondor, no To the See, no Marya, no whatever? Doesn't matter if you have a Drinking Song on your hand! — Flrbb 157 7/2/19